Bidders were in attendance ringside, online and over the phone. It was a sale that saw something to spark everyone’s attention with engagement from Northern Ireland & the UK. Breeder’s bulls hit some headline prices, showing a keen demand for the breed. Top price of the day was €7,800, with 5 bulls selling for €5,000 or more, highlighting the depth of trade.

Commenting on the sale Chief Executive & Breed Secretary Ronan Murphy said:  Overall the average sale price remains strong with solid interest from NI and the UK. There was strong demand for high quality bulls with the top 10 sold averaging €5,280 per head. On farm sales of Limousin remain strong with only 60% of catalogued bulls being presented for sale. We would like to thank our Judge Mark Phillips for presiding over our show and wish all buyers every success with their new purchases”.

Show of males took place of on Friday evening the 12th of November while the show of females was held on Monday morning. We extend our thanks to our judge Mark Philips of the Newmarque and Mardoneen herds, Cumbria, UK.

Headlining the sale at €7,800 was the Junior Male Champion Lot 69 Cartronfree Rodger Et, from Martina Browne, Carragh, Granard, Co Longford. A young Kilcor Iceman son out of Ampertaine Odell, a UK imported cow going back to Ampertaine Elgin. Rodger is the first calf off Odell, purchased in Carlisle for £13,000gns. Having impressed Judge Mark Philips during the pre-sale show, roger also came with a five-star replacement index value of €141. He makes his way across the Irish sea, purchased by Mr. Andrew Ewing, Dumberton Farms, Annnan, Scotland.

Hot on his heels at €7000 was the weekends Senior Male Champion Lot 40 Ernevalley Rolex ET, from Eddie Lynch, Grouse Hall, Loughduff, Co Cavan. The judge Mark Philips described his Champion as ‘a very showy upstanding bull with length and power’. Rolex is off a home bred bull Ernevalley Madison, an Ampertaine Forman son. Out of a home bred dam Ernevalley Mississippi Et. by Sympa. The May 2020 born bull has also a solid set of figures with a terminal index of €161 and a replacement index of €117. Rolex’s new home is with purchaser Mr David Meegan, Lisnamack, Broomfield, Co Monaghan.

Next up selling at €5,700 was Lot 53 Stragheglin Ralph from Ciaran Brogue, Coragh, Belturbet, Co Cavan. Placing 4th in his class. This June 2020 born; heifers’ calf is a Mereside Godolphin son. Ralph is out of a home bead dam Stragheglin Margaret and comes with a terminal index figure of €134 and an easy calving figure of just 3.3%. Purchased by Mr Mervyn Moore, Clareview, Kesh, Co Fermanagh. 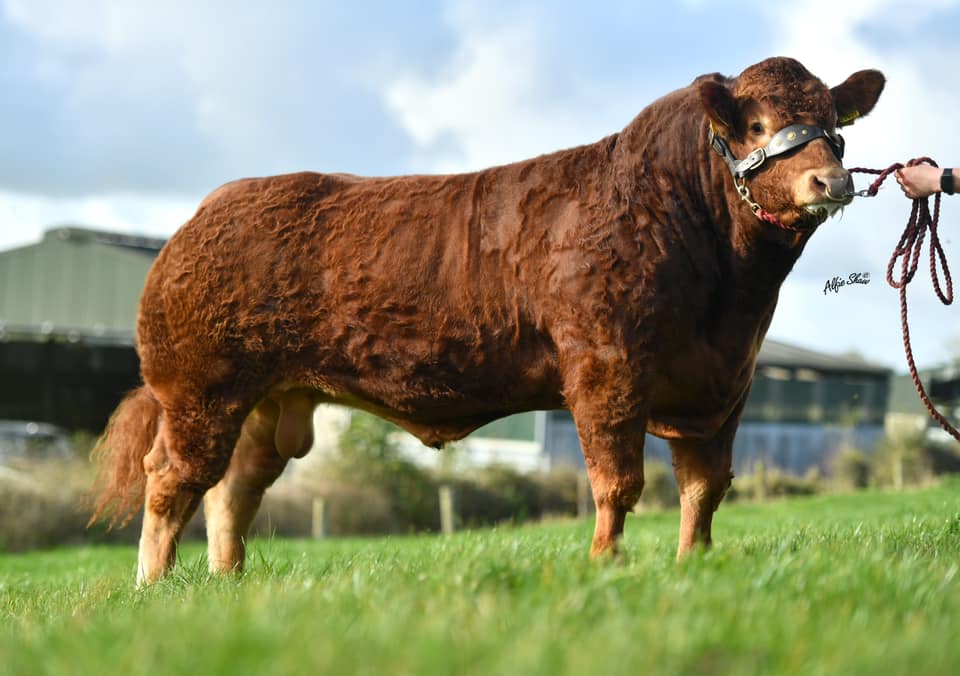 At €5,200 was the Reserve Senior Champion Lot 43 Ernevalley Rambo, again from Eddie Lynch, who came away with an impressive stash of rosettes from the presale show. Stable mate to the senior champion, Rambo is a May 2020 born bull by Kaprico Eravelle and out of a home bread dam Ernevalley Malificent ET. He boosts a star-studded set of figures with a terminal index value of €153, a replacement index value of €154 and a short gestational value of just 1.15 days. Rambo makes his way to Kells, Co Meath to the home of Mr Conor Govern.

Not far behind, was Lot 5 Carrowclogher Rambler from Sean Vahey, Ballyheane, Castlebar, Co Mayo. One of the oldest bulls in the sale, he placed 4th in his class before going on to make €5,000. Rambler is a Bavardage son out of home bread dam Carrowclogher Madonna. With an impressive set of figures, this double five-star bull has a terminal index value of €173 and a replacement index value of €159. In addition, he has an easy calving figure of just 2.9% and short gestational value of 1.45 days as a result he was an early favourite with Katie & Philip Brennan, Cordevlish, Co Monaghan.

Selling for €4,600 was Lot 41 Milbrook Regal from William Smith, Oldcastle, Co Meath. Placing third in his class. The May 2020 born bull is sired by Milbrook Nobel ET out of home bread dam Milbrook Lenya. Regal carries the myostatin traits of F94L and NT821 as well as a tremendous terminal value of €179. He caught the eye of Mr Noel Kenny, Ashford, Co Wicklow.

Similarly, sold for €4,600 was Lot 65 Townleyhall Royalty from Derek Russell, Drogheda, Co Louth. Placing 3rd in his class. The young August born bull is sired by Mullary Interpid and out of a home bred cow Townleyhall Laurel. Purchased by Mr Owain Llyr he makes his way to Tyn Y -Wern, Ruthin, Wales

Again at €4,600, Mr Llyr purchase Lot 73 Brickhall Regista, from Michael McInerney, Cartloe, Co Clare. The September 2020 bull is sire by Plumtree Fantastic out of home bred dam Brickhill Leah. With stars in abundance, Regista has a terminal index value of €163, replacement index value of €142 and a short gestational value of -1.02 days.

Earlier in the day Mayo based breeder David Coogan achieved €4,100 for Lot 17 Clooncara Limousins Raider. Grasping the red rosette in the pre-sale show, this April 2020 born bull is sired by Craigatoke Jack and out of a Thomastown Harriet dam. Raider carries the myostatin traits of F94L and NT821 as well as a terminal index value of €138. The winning bid went to Mr Gordan Burleigh, Derrylester, Co Fermanagh.

A trio of bulls achieved €4,000 apiece with the first being the September 2020 born Lot 75 Brickhill Redford, another bull put forward by Michael McInerney, Cratloe, Co Clare and purchased by Mr Patrick J Keane, Lismactigue, Ballyvaughan, Co Clare. Redford is a Mereside Goldolphin son going back to a Ampertaine Foreman dam. 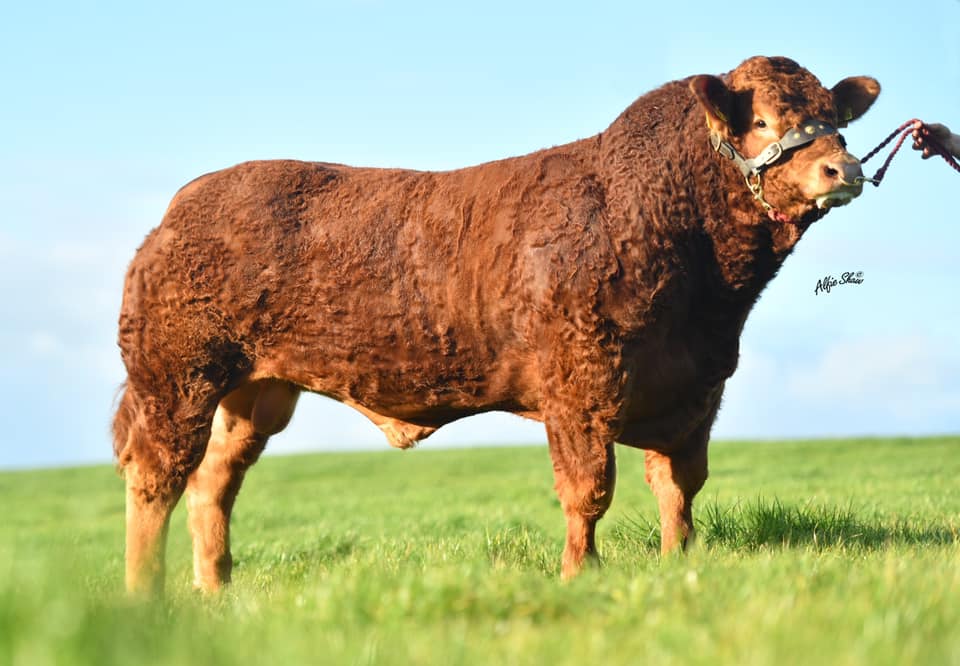 Breeder Eddie Lynch matched the €4,000 price tag with Lot 49 Ernevalley Redrum. The June 2020 born bull is a Kaprico Eravelle son out of a Ronic Hawlk dam. Placing 1st in a strong class he is also a double five star, with a terminal index value of €157 and replacement index value of €153. He was secured by Mr Donal Byrne, Ballyhaunis, Co Mayo.

Champion Female was awarded to Lot 107 Brookland Razzle Dazzle, from John Hickey, Kilcommon, Thurles, Co Tipperary. As her name suggests, she dazzled Judge Mark Phillips, commenting after the show “The more I saw her the more I liked her.” “A real nice, sweet female champion, a real flashy heifer.” One of the youngest heifers put forward for sale on the day. She is sired by Bavardage out of a Ampertaine Foreman dam. Razzle Dazzle has figures to match with a maternal value of €153. After a bidding battle Mr Philips wasn’t leaving without her and the hammer dropped at €6000.

Many thanks to the team at Elphin mart for hosting the first Irish Limousin Cattle Premier Show & Sale and for pulling out all the stops.

To Marie, Colette and Claire in the office for processing the entries and putting together the catalogue. To our Stewards and event organisers who ensured the show and sale ran smoothly.

Thank you, Alfie Shaw at Agrimages for capturing the moment. To view further images from the day’s action or to purchase copies view Agrimages website.

To the team at AVTech for facilitating the live stream on our social platform.

Thank you to our experienced and highly respected auctioneer George Chandler.

And finally thank you to all, bidders and purchasers, we wish you luck with your new stock.