Our Annual Spring Premier show and sale was held on Sunday and Monday the 15th and 16th March in Roscrea mart. As we are living in the most unprecedented times the show and sale was held under strict governmental guidelines. A limit of 100 people was put in place in both the show and sale rings. To ensure anyone that wished to see the bulls we had Patricia Kennedy in action recording the show section on Sunday evening, we then had Denis Barrett Auctions on hand with a live feed and online bidding facility on Monday. We are very appreciative of breeders and customers alike for their understanding and support of the necessary measures that were taken to ensure best practice to protect everyone.

The show was judged by Mr. Martin Conway of the noted Craigatoke herd based in Plumbridge, Co. Tyrone. The Craigatoke herd has enjoyed much success in the show and sales rings of Northern Ireland and the UK, Craigatoke Jack – one of the stock sires to the Ardlea Elite herd was bred by Martin. Jack was purchased in Carlisle in 2015 having placed first in his class and Reserve Junior Champion for 17,000gns. We are very grateful to Martin for undertaking the role of judge at short notice.

Many thanks to our stewards Ann and Donal, to the Inspector Pat McGuinness and to the management and staff of Roscrea mart for all their assistance. Many thanks to George our auctioneer and to Patricia and Denis. We would like to wish all purchasers the very best of luck with their new livestock. Our next sale is on this Saturday the 21st March in Tullamore, Co. Offaly.

Martin tapped out NOVINCHRISTIE NICHOLAS as his Senior Champion.  Nicholas is an August 2018 born son of Norman Inventor and the homebred Ronick Hawk daughter Novinchristie Isadora. Bred in Swinford, Co. Mayo by Noel Barry, Nicholas came to the ring with five star ratings in Replacement index, Terminal index, Carcass weight, Carcass conformation and Daughter Milk. After a flurry of bids Nicholas was tapped down to a county Dublin based farmer for €8,000.

Standing in reserve to Nicholas was SLIABH FELIM NODDY from Sean Ryan, Cappamore, Co. Limerick. Noddy is a son of Ampertaine Foreman and Sliabh Felim Jenny (mother to last year’s top-priced bull €11,000 Mourinho and Leo (sold in 2018 for €5,000)). Noddy was born in August 2018 and came to the ring with an array of five star ratings and a muscle score of 136 which is in the top 3%. Noddy was purchased by Matthew Harrison, Portadown, Co. Armagh for €5,000.

The Junior Champion BOS NERO was bred by Joe Collins from Carrick On Shannon, Co. Roscommon. Nero is an eye-catching 15 month old son of Goldies Jackpot and the home bred Ampertaine Commander dam Bos Julie. With an array of five star ratings Nero caught the eye of Gerard Keane for his herd based in Kinvara, Co. Galway. Nero’s selling price was €4,400.

The Reserve Junior Champion FINBOY NIKE found a new home in the stunning surrounds of North Yorkshire. Nike was purchased by Chris Akrigg of Manor Farm, Skipton to run with a commercial herd of Limousin and British Blue cows. Nike was bred by Tom Harney of Birr, Co. Offaly. He is a son of Plumtree Fantastic with Ampertaine Elgin and Grahams Samson also in his lineage. The hammer fell at €4,000 for Nike.

OLDTOWN NOTORIOUS a Ronick Hawk son bred by William Hogan, Thurles, Co. Tipperary was the final bull to breach the €4,000 mark. Notorious has five star ratings in almost all traits and came to the ring with a predicted calving difficulty of 3.4% on beef cows. Notorious was purchased by David Connor of Mountrath, Co. Laois. 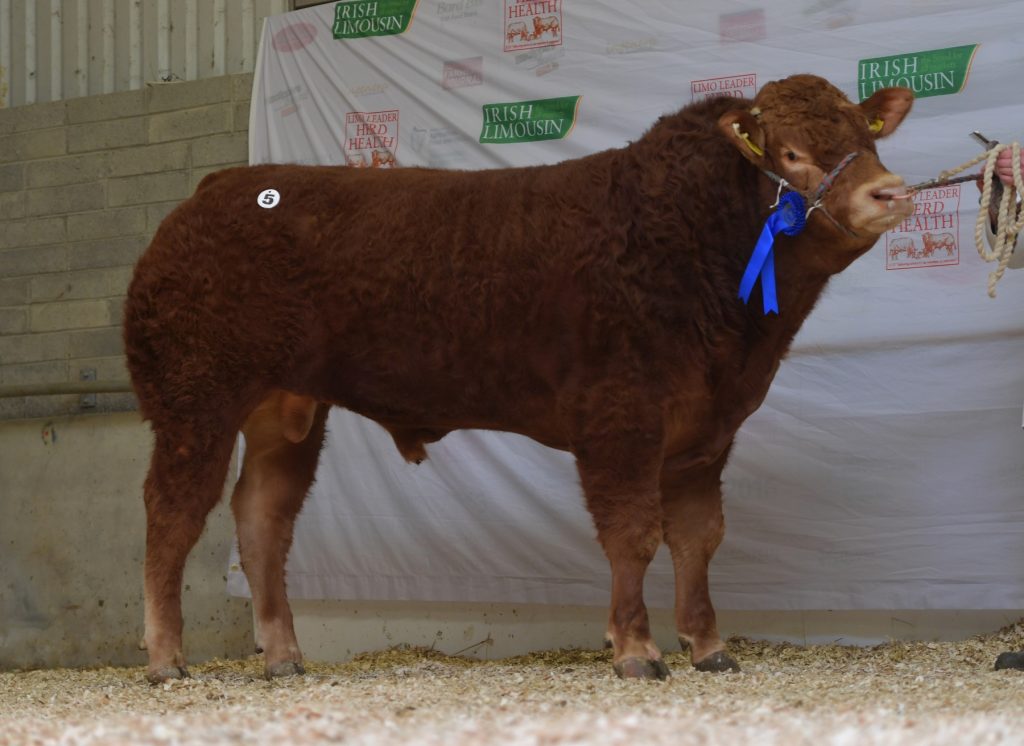 The second prize winner RUTLAND NELSON sold for €3,600. Nelson was bred by Noel Ruttledge, Co. Mayo. He is a son of Ampertaine Commander and the Ampertaine Elgin daughter Dromullin Kerry Et. Nelson was purchased by Henry Hynes of Kilfenora, Co. Clare.

Ciaran Smith of the Cnoc Rua herd based in Redhills, Co. Cavan presented four bulls at the sale, top priced bull of the four was September 2019 born CNOC RUA NIGHTHAWK at €3,500. Nighthawk is a son of Goldies Jackpot and Carwin Export (a Sauvignon daughter). Described as “a bull that has more stars than a frosty night” first prize winning Nighthawk was purchased by Shane McGeough.

The Plumtree Fantastic son BROOKLANDS NOAH sold for €3,400. Noah was bred by Clive Jennings, Enniskeane, Co. Cork. His dam Brookland Ivette has Queenshead Altea and Ronick Hawk in her sire stack. First prize winning Noah was purchased by a UK based farmer. 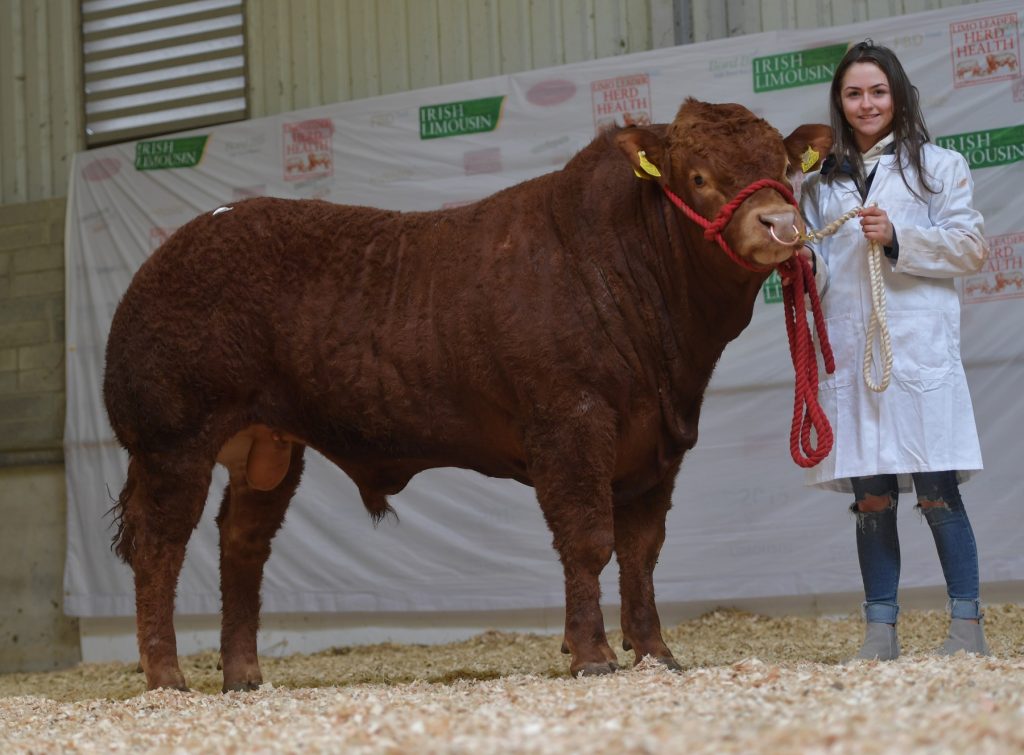 Helen Meaney of Lissycasey, Co. Clare accepted €3,200 for her Castleview Gazelle bull LIOSMEAN NELSON. This October 2018 born bull is out of the Ulm daughter Liosmean Lass. Nelso was purchased by a UK based customer. 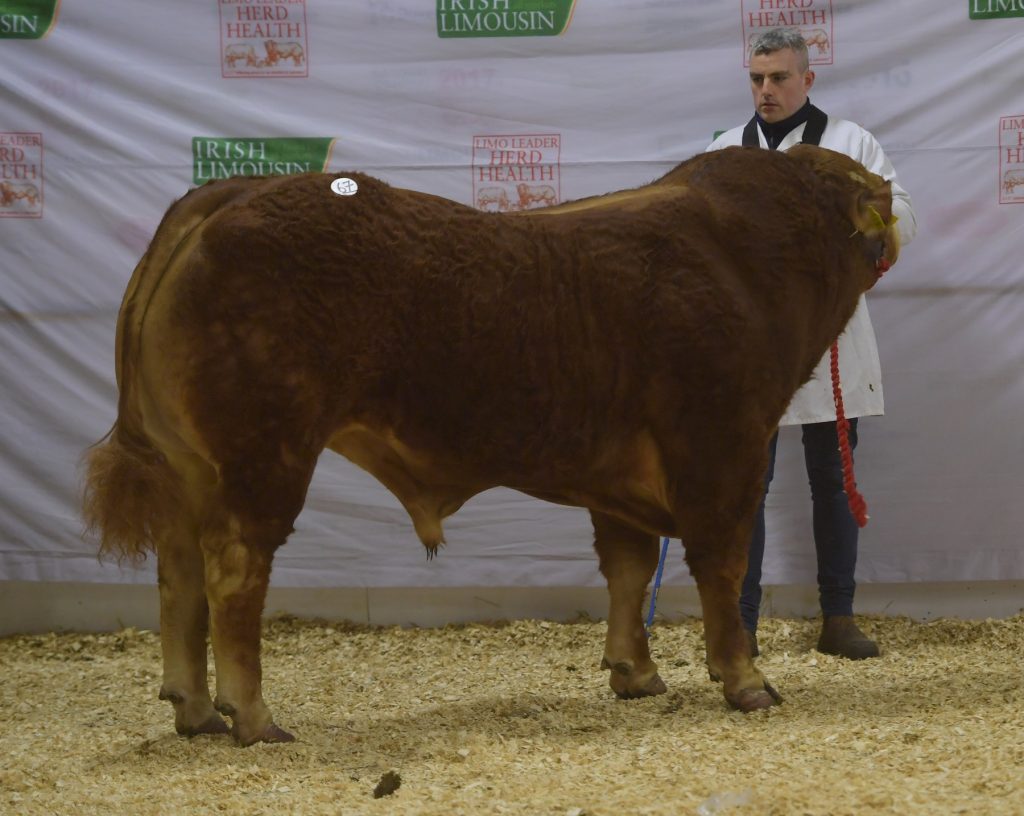 John and Tom Hickey from Thurles, Co. Tipperary sold BROOKLAND NESSAN for €3,200. Fifteen month old Nessan has Elderberry Galahad, Vison and Ramses in his sire stack. This third prize winner was acquired by James Alexander of the noted Jalex herd based in Toomebridge, Co. Antrim.

The final bull at this price was THE GROVE FARM NUDDLE from Bernard Garrett, Ballyconnell, Co. Cavan. Nuddle, a son of Norman Inventor was purchased by GB Jones Ltd, from the UK.