The final society show and sale took place on Friday the 30th November 2019 in Tuam mart in county Galway. The show took place at 4.30pm with the sale kicking off at 7pm. Judging the show classes was James Kelly from Clare. James is well known from the pedigree show scene – both as an exhibitor and for his work with both John Lynch and Richard O’Beirne preparing cattle for show. Sixty six percent of the bulls on offer sold with 75% of the heifers finding new homes.

Many thanks to James for judging this event. Thanks to George our auctioneer, Donal for stewarding and to the management and staff of Tuam mart. We wish all purchasers the very best – Thank you for making Limousin your breed of choice.

The blue rosetted bull Novinchristie Noah topped the sale at €4,500. Noah is a son of Norman Inventor and the Pacha 19 dam Novinchristie Cindy. Noah has five star ratings in Terminal Index, Replacement Index, Carcass weight and Carcass conformation. Noah was bred by Noel Barry, Swinford, Co. Mayo. After a flurry of bids Noah was acquired by Terence Keelan from Monaghan.

The Champion bull also came from Mayo – Clew Bay Neil is from the Golden family, Westport. Multi-starred Neil is a son of Ampertaine Foreman and the home bred Goldies Terence dam Clewbay Fiona. Neil was purchased by Fermanagh based James McCauley.

The youngest bull to sell was Portauns Nigel from Laurence Lynch, Kilmallock, Co. Limerick. Nigel has Ampertaine Commander, Sympa and Gamin in his sire stack. Henry Keane, Claremorris, Co. Mayo acquired Nigel for his herd at a price of €2500.

Local farmer Padraig Linnane purchased Bunnymore Nathan from Michel Reynolds, Carrick on Shannon, Co. Leitrim. Nathan has Bavardage, Sympa and Mas Du Clo in his sire stack. This third prize winner came to the ring with five star ratings in many traits. Nathan was secured for €2,450.

Bunnymore Nero, a second prize winner commanded a selling price of €2,200. Nero was bred by Michael Reynolds. This bull has Ampertaine Commander, Carmorn Copilot and Mas Du Clo in his lineage. He was acquired by Thomas Conlon, Kiltimagh, Co. Mayo. 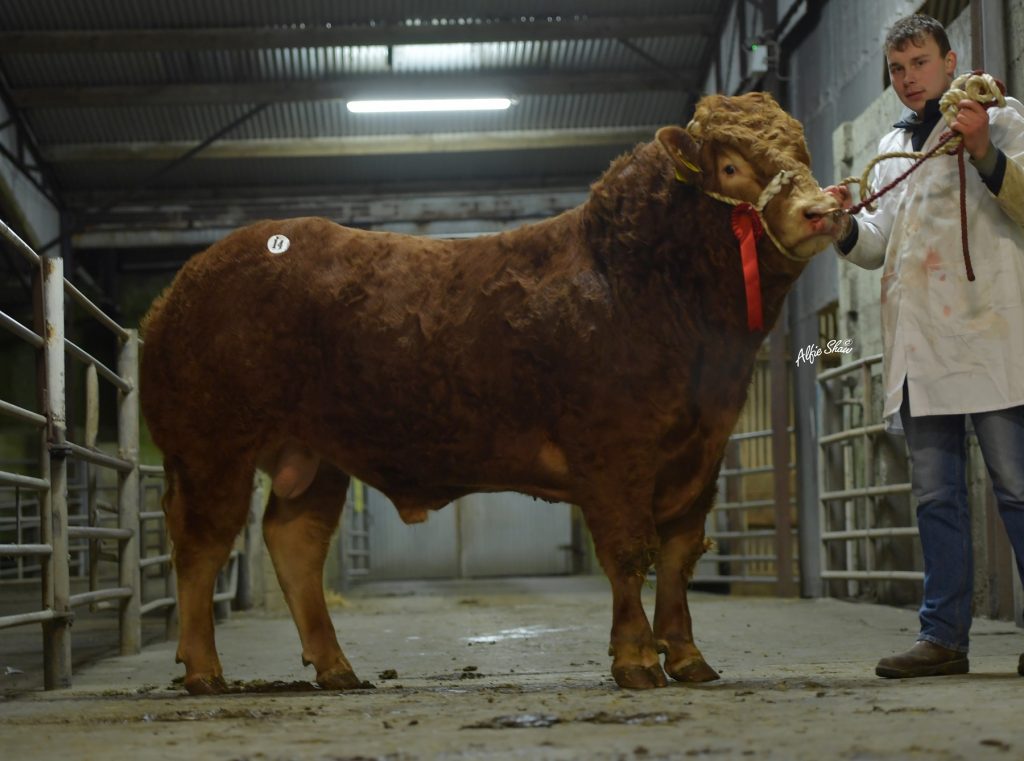 Also heading to Kiltimagh is first prize winner Meadowview Navigator bred by Shane Sheridan. Navigator is a son of Lodge Hamlet and the Castleview Gringo dam Meadowview Lucy. His purchaser was Jarlath McHugh for €2,000.

Mullaghboy Nicholas from Matthew Fee sold for €1,900. Nicholas has Ampertaine Foreman, Wilodge Fastrac and Fieldson Alfy in his sire stack.

Topping the female trade was the Cavelands Jolly daughter Shannon Noramay from Sarah McElligott, Listowel, Co. Kerry. Noramay was awarded the Female Champion by judge James Kelly. Her dam Shannon Harriet has Ultime and Navarin in her sire stack. Noramay returns to Kerry to a Tralee based herd. The securing bid was €2,300.

Also from Sarah McElligott was the fourth prize winner Shannon Norrie. This yearling heifer has Usse, Kaprico Eravelle and Vagabond in her sire stack. Norrie was purchased by Darragh Mullin, Ballinasloe, Co. Galway for €1,750.

Second prize winner Shannon Nikita sold for €1,700. Nikita is a daughter of Chatelain and the homebred Attirant daughter Shannon Jetta. Nikita was purchased by Tuam based Arthur Mitchell.