It was a buyers’ market at the October Premier Sale reflecting the current state of play in the livestock industry. The sale was held on Bank holiday Monday 28th October, with the show of males on Sunday evening the 27th of October and the show of females on Monday morning. The show was judged by Sarah Priestley of the noted Brontemoor herd based in Cumbria.

We would like to thank Sarah for judging. Many thanks to our auctioneers George Candler who officiated at the bull sale and Denis Barrett who took charge of the heifer sale. We are indebted to our stewards at all events – here in Roscrea stewarding duties were undertaken by Donal Moloney, Frank Buckley and Jimmy McHugh. Many thanks to all breeders, exhibitors and the management and staff of Roscrea Mart. Sincere thanks to the purchasers at society sales, we wish you well with your new livestock.

This year’s Champion of Champions – Rhyne Noah claimed both the top price of the day at €8,000 and the Senior champion title. Noah is a son of Wilodge Joskins and the Festin dam Clonadrm Urselle Et. This April 2018 born bull boasts five star ratings in Terminal index, Carcass weight and Carcass conformation. Noah was bred by Mark Hagan, Killoe, Co. Longford and after a flurry of bids he returns to his birth county to the farm of Cyril Naughton, Edgerstown. 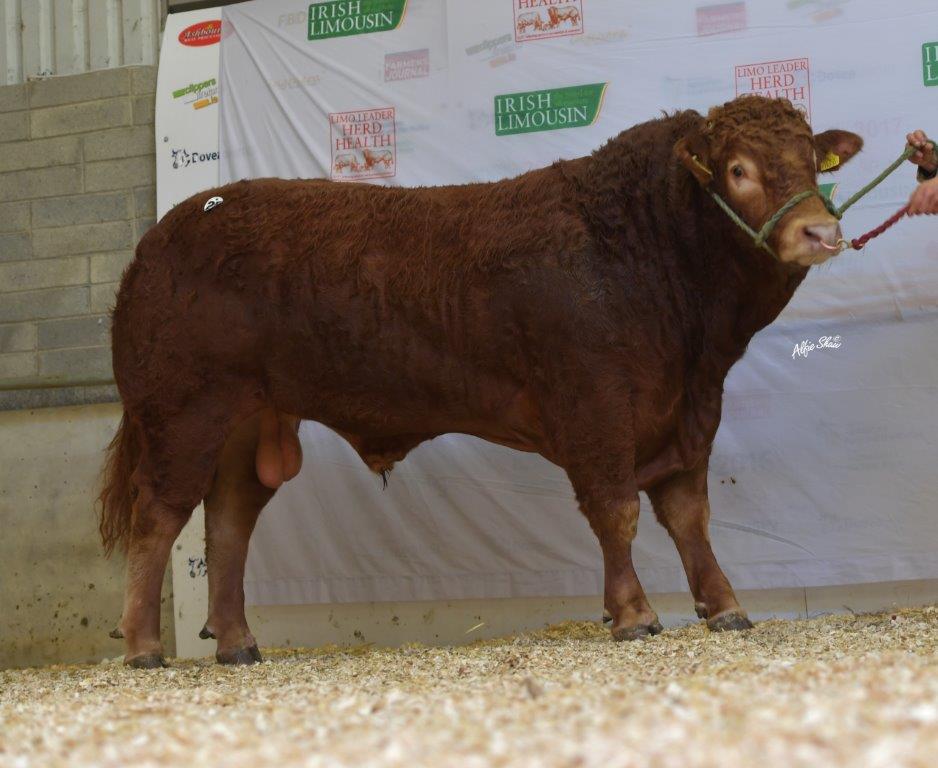 Ballinahinch Noah was the pick of George McCague for his Bridgeview herd based in Newry, Co. Down. Noah was the sole Grangeford Jojo son on offer, his dam Ballinahinch Hillary has Ultime and Sympa in her sire stack. Claiming the blue ribbon in his class – multi-starred Noah was bred by Seamus Cullen, Newtownmountkennedy, Co. Wicklow. Noah sold for €5,600.

Cornamona Noble ET was awarded the Junior Champion title which adds to an impressive collections of titles from the summer show circuit including Junior and Overall Male Champion at Tullamore and Connaught interbreed Bull Champion. Noble was bred by Paul Summerville, Dooras, Co. Galway. He is a son of Ampertaine Gigolo and Titchburn Grace, a Cloughhead Umprie daughter. Multi-starred Nobel was acquired by John Martyn, Oughterard, Co. Galway from his exhibitor Richard O’Beirne, Tuam for €5,000.

The Reserve Junior Champion 13 month old Milbrook Noticabull ET was secured by a Cavan based bidder for €4,350. Noticabull is a son of Ampertaine Elgin and the Tatoumh dam Milbrook Funtasia Et. He was bred by William Smith, Oldcastle, Co. Meath. Noticabull had amassed a number of prizes during the summer show season.

Second prize winner Clonlara Norman sold for €4,000. Norman was bred by Colin Hogg, Clonlara, Co. Clare. Norman is steeped in French genetics including Bavardage, Neuf and Ramses. Born in May 2018 he was secured by Anthony Quinn, Castledermot, Co. Kildare. 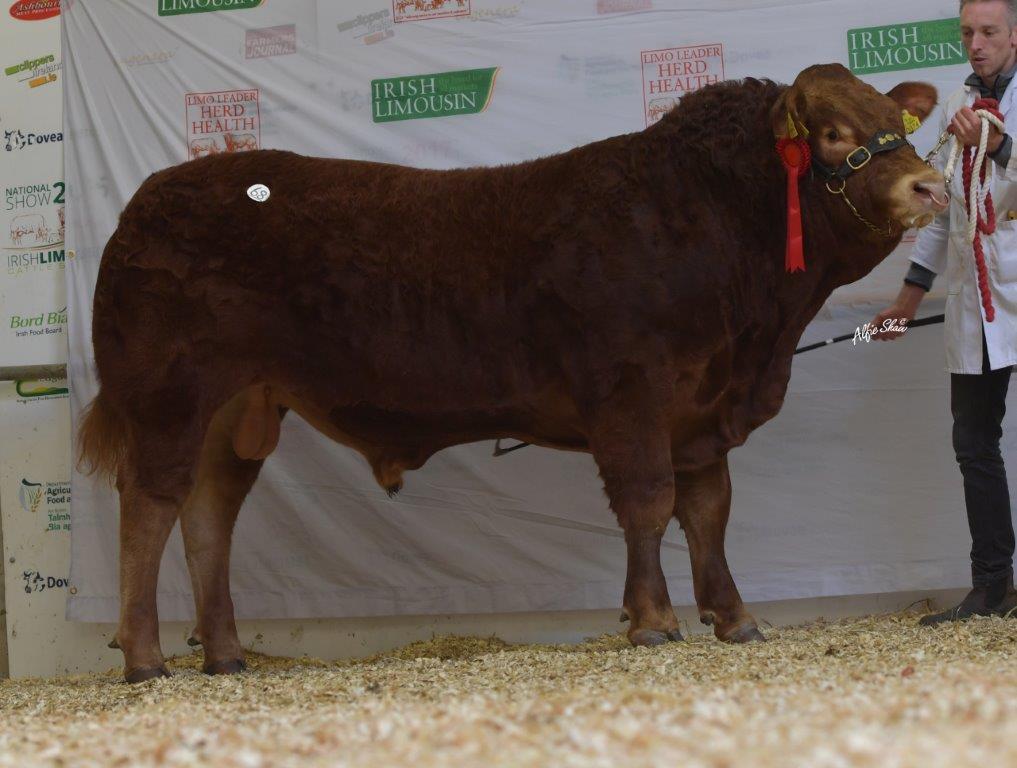 Pat McGuinness, Bettystown, Co. Meath sold Bradden Bridge Nirvana Et for €4,000. Born in May 2018, Nirvana was first in his class in the pre-sale show. Nirvana is the first bull in Ireland from the Foxhillfarm Mary / Bankdale Alice Family. Foxhillfarm Mary is full sister to multi winning Gracie. Nirvana was acquired by Andrew Ewing, Dumfriesshire, Scotland.

Taking the plaudits as Female Champion and the youngest heifer in the sale was Drummin Natasha from John McInerney, Newmarket On Fergus, Co. Clare. Natasha is a very eye-catching yearling daughter of Goldies Jackpot, her dam Drummin Kylie has Glorieux and Wilodge Vantastic in her pedigree. Natasha had great success during the summer show season winning Limousin and Interbreed Champion at three shows – namely Newmarket on Fergus, Castlerea and Trim. Natasha caught the eye of Hywel & Susan Watkins, Llanfyllin, Powys, Wales for their Cammen pedigree herd. Natasha sold for €5,700. 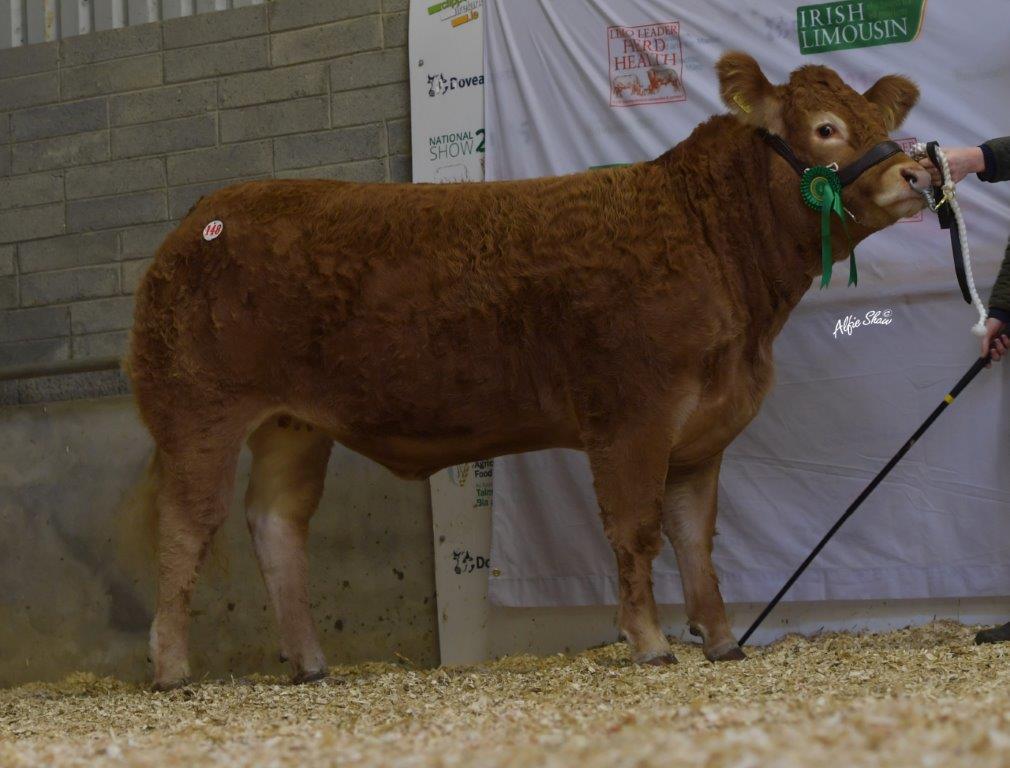 Noel Fennessy’s Wood Road Nora sold for €4,000. Much admired in the show ring, Nora has Gerrygullinane Glen, Ideal 23 and Wilodge Vantastic in her lineage. This 17 month old heifer claimed third prize in her class. She was acquired by Owain Llyr. 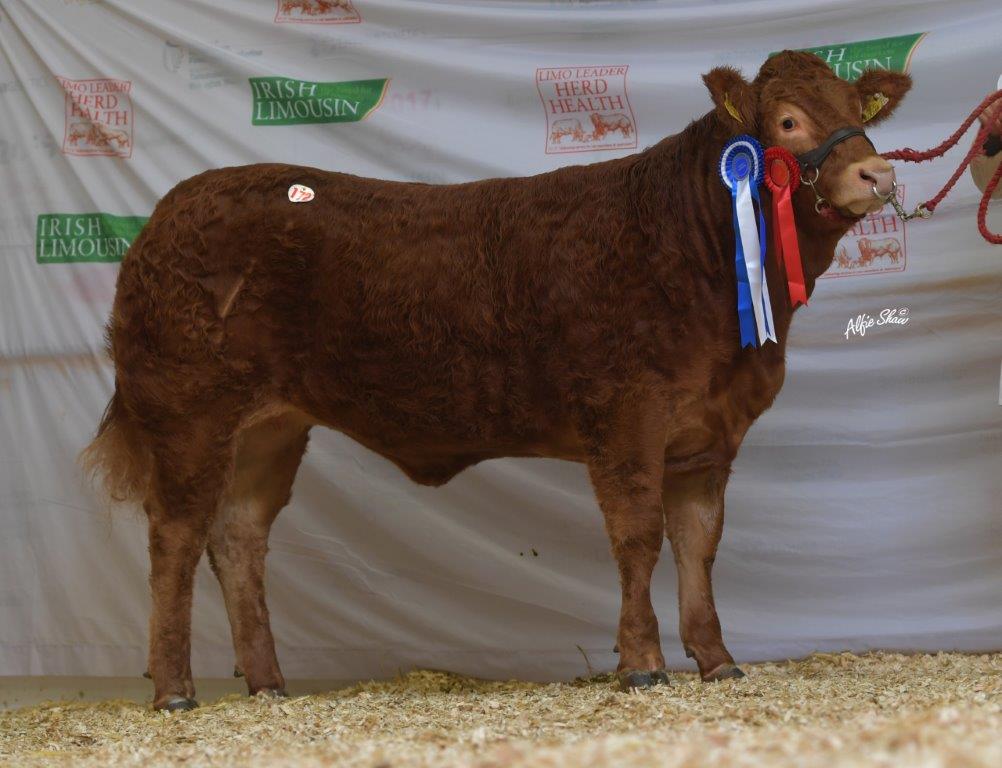 Also heading to the Bridgeview herd is the Reserve Female Champion Hurricane Nikita. Born in September 2018, Nikita was bred by Darragh O’Meara, Ardnacrusha, Co. Clare. Nikita is a daughter of Lodge Hamlet and the homebred Wilodge Cerberus dam Hurricane Karley. Nikita enjoyed a victorious summer show season, picking up many red rosettes including in the Clare Calf finals. Nikita’s selling price was €4,000.

Our next sale will be held in Tullow, Co. Carlow on Wednesday 13th November. The Catalogue is available by clicking here.