On Wednesday 12th June a group of Irish Limousin Cattle Society Council members and the Breed Secretary travelled to France to visit a number of Limousin breeders in the Limoges region. The purpose of the visit was to view progeny of sires currently in use in Ireland and also to assess the progeny of new bulls which could be of interest to breeders in the future.

On our arrival in Limoges airport on Wednesday afternoon we were met by our long term associate Mr. Pierre Roy of Crealim and his very able assistant Marine Giroux. After the introductions we left Limoges and headed south in the direction of Brive to the farm of Gaec Taurisson. Mr. Taurisson runs a herd of 70 cows mainly aimed at a specialist market for young beef. The calves are suckled twice daily and remain inside on a ration until being finished at five months where provided they meet the specification of E grade and carcass weight of 165 kgs can command a premium of €9 to €10 per kg. With this market in mind the emphasis is on traits combining good milk, growth and the ability to produce a top quality carcass. 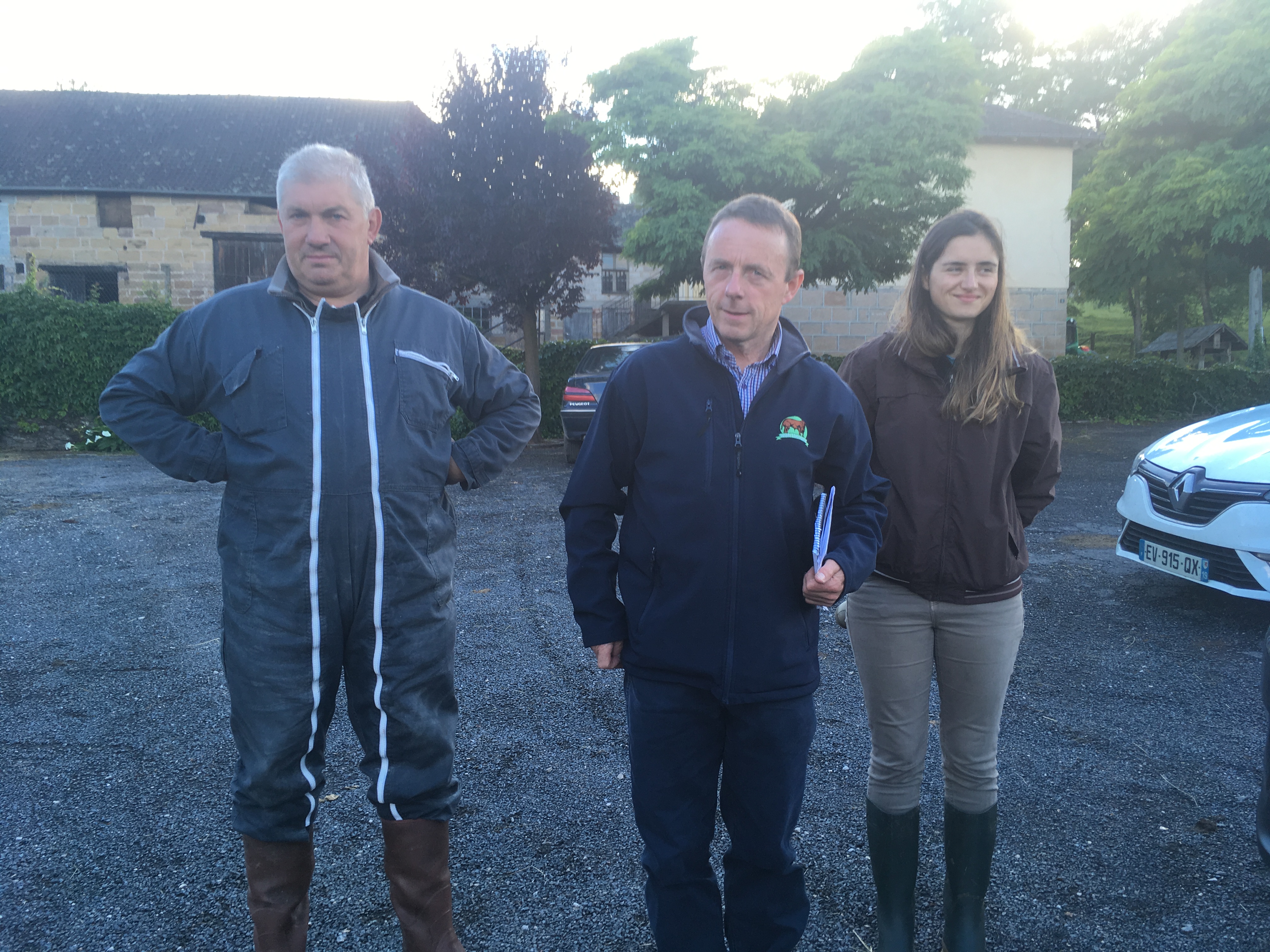 Some excellent cows were inside being fed on a high maize diet which when finished would expect to realise up to €5 per kg.

The in-calf heifers which would be calving down at three years old displayed power, size but still fine boned and displaying good breed character were sired by Chatelain, Ewek, Beaupre, Edakkya, Bavardage and Valerian.

Cows rearing calves were by sires such as Highlander, Epson, Urville, On-Dit, Bavrdage and Louxor. A large proportion of calves here by Cameos, Grenache, Gstaad and Ewek. 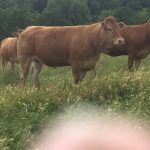 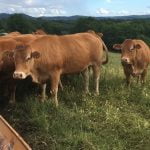 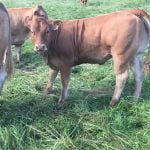 On day 2 the group travelling two hours south of Brive to Daniel and Michael Theury who run 180 cows with the herd being founded in 1986. Once again we learnt that some progeny from this herd were destined for a supermarket chain called Auchan which retails the product under the brand Veau D’Aveyron with 50% retailing in France and the rest exported to their Italian outlets. To qualify for the brand calves are finished at 8 months of age and allowed suckle twice daily along with creep feed. The supermarket chain insists that any breeder producing for this market must visit one of their outlets annually to discuss the production system with the consumers.

The in-calf heifers we learnt would be calving down at three but in the future will be served to calf down at two years old. The group were very consistent with excellent breed qualities and temperament, sires used were Edakkya, Dahair, Cameos, Ewek, Chatelain, Usse and Bel Orient. The day was extremely hot with a high prevalence of fly activity which prompted the question in relation to mastitis, to our surprise the farm had no issues whatsoever with mastitis and the only problem with the flies could be sore eyes.

Their next group were breeding heifers which were grazing on a rented farm with steep inclines. In this group we saw progeny by Edyakka, Chatelain, Usse, Ozeus, Cameos, Bel Orient, Anecdote and Azurri.

Back at the main farmyard were a range of buildings with one particularly large building having solar panels on the roof producing energy which both serviced the farm and was also sold to an electricity company.  The cows with heifer calves were grazing near the farmyard and were of a consistently high standard, sires included Bavardage, Anecdote, Edyakka, On Dit, Azurri and Chatelain. Equally their heifer calves at foot were similar in quality with their sires being, Cameos, Erebos, Chatelain, Grenache, Ozeus, Dahair, Bel Orient and Tastevin.

The male calves were in the shed after being weaned three weeks, once again many of the calves were by Cameos, Anecdote, Beaupre, Azurri and Ewek. Some very good cows destined for culling were being fattened in another shed with their calves still suckling, in the group were two exceptional Mas Du Clo and Neuf cows. 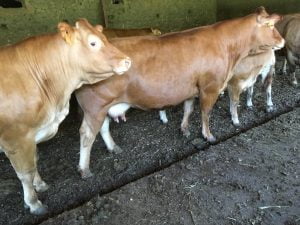 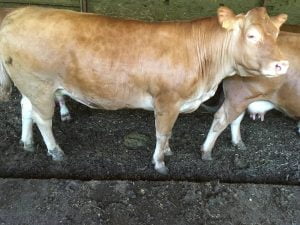 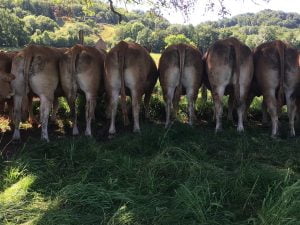 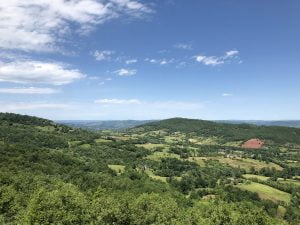 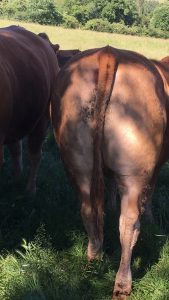 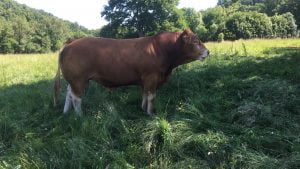 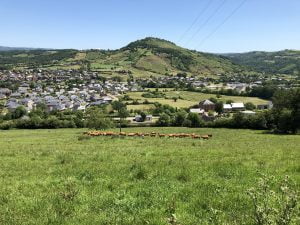 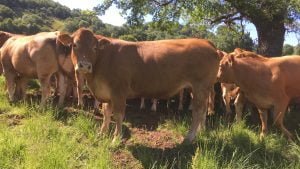 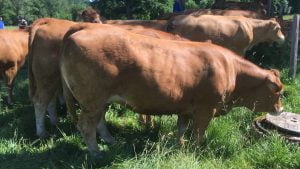 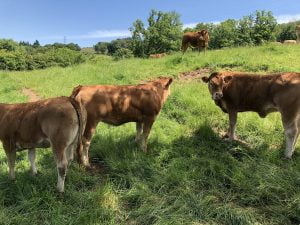 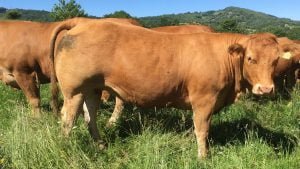 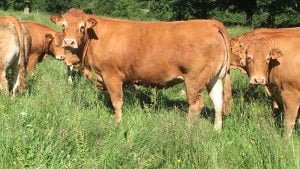 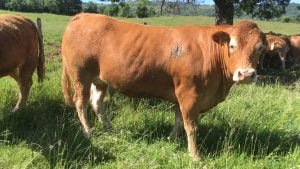 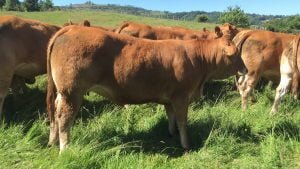 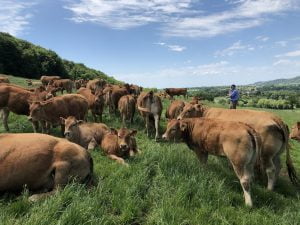 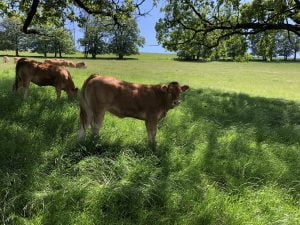 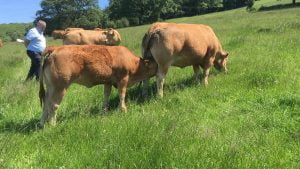 The first farm visited on day 3 was an agricultural college which happened to be the birthplace of Cameos. This 50 cow herd displayed exceptional temperament and contained progeny by Usse, Urville, Azurri, Anecdote, Tastevin, Grenache and Bel Orient. The calves at foot were by Gengiskhan, Cameos and Gstaad while the heifer calves included progeny of Grenache, Histone, Bel Orient, Edyakka and Gstaad. Once again, the in-calf heifers were equally quiet and pick of the group here being by Damona, Bel Orient, Fest Noz and Cameos.

Next visit was to an organic farm where their main enterprise is selling weanlings at €7 per kilo. The weanlings which were only off their mothers two weeks with the standout animals being Grenache and Edyakka.

The cows in this herd had back breeding to Bavardage, Highlander, Tastevin, Urville, Ozeus and Dauphin. 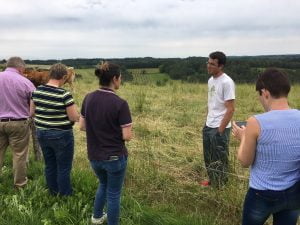 Afternoon saw us at the Moussours maternal test station where at the moment 250 females are on test consisting of maidens, in-calf and first calvers with their calves at foot.

The first calved heifers which had calves at foot by Hauteclair and Tougrand were themselves by IO (a son of Ozeus), Ivantonov ( Bavardage x Remix)  and IX (Bavardage x Neuf). 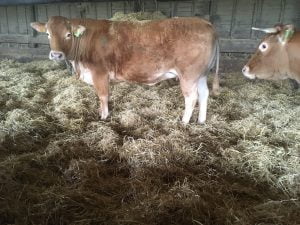 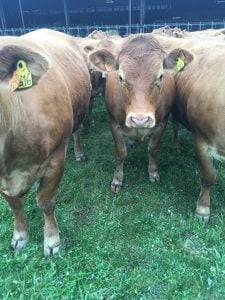 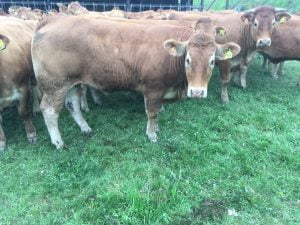 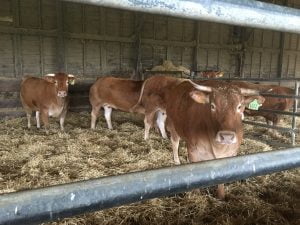 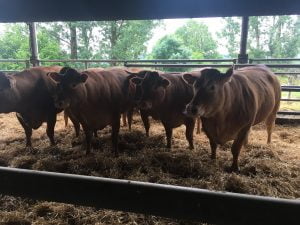 Our last day saw us visit Scea-Domain Bourdelas who farms 180 hectares with a mix of 90 cows, 500 Texel sheep and arable. This herd concentrates mainly on beef production with cow, heifer and bull finishing programmes.  The focus is on maintaining the maternal qualities but still being mindful of beef production and so muscle has 10 points more than skeletal in his breeding programme. The bulls are sold at 16 months as steers even though they haven’t been castrated, their carcass weight being 500kgs and price €4.10 per kgs. The sires used Cameos, Tastevin, Usse, Damona, Armoric and On-Dit.

Cull cows in for fattening would be expected to realise €4.50 per kg. 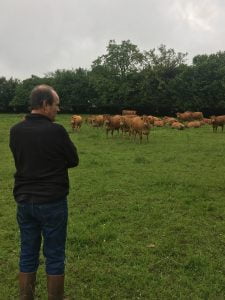 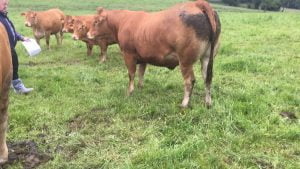 The observations of the visiting group were that the French breeders have a clear breeding programme with an emphasis on ensuring the breed conforms to a standard with consideration for easy calving, milk and an ability to produce beef.

In the young male category Cameos, Gstaad and Ewek appeared to be consistent on beefing abilities.

The ILCS would like to sincerely thank both Pierre and Marine for their assistance and organising the trip.