The annual Show and Sale took place in Tullow mart on Wednesday the 14th November 2018. The sale met with a clearance rate for bulls of 66% with an average selling price of €2,620. The only heifer on offer sold for €2,100. Tasked with judging the pre-sale show was Orla Curtin of the Corcamore herd based in Clarina, Co. Limerick. Auctioneering duties fell to George Candler. We would like to thank our judge Orla, Auctioneer George, our breeders and all purchasers here in Tullow – we wish you well with your new livestock. We greatly appreciate the assistance and help given to us at the mart by the manager Eric and staff.

Lot 5. Topping the sale was Begsrieve Miller at €3,300. Miller is a March 2017 born son of Veteran (S771) and the homebred Brooklands F0959 daughter Begsrieve Jena. He came to the ring with five-star ratings in Replacement index, Terminal index, Docility, Carcass conformation and Daughter milk. Miller, a second prize winner, was bred by Dermot Rowe, Navan, Co. Meath. Miller was purchased by Joseph Walshe from county Carlow.

Lot 12. Champion bull here in Tullow was Corrakid M 49 from the herd of Barry Dooley, Inniskeen, Co. Monaghan. Corrakid M 49 is a son of Lowerffrydd Empire (S1148), his dam Willowpark Elite  has Ionesco and Epson in her sire stack. M 49 has a four-star Terminal index of €122, he has five-star ratings in Docility and Carcass conformation. Born in May 2017, M 49 was purchased by John Farrar, Camolin, Co. Wexford. 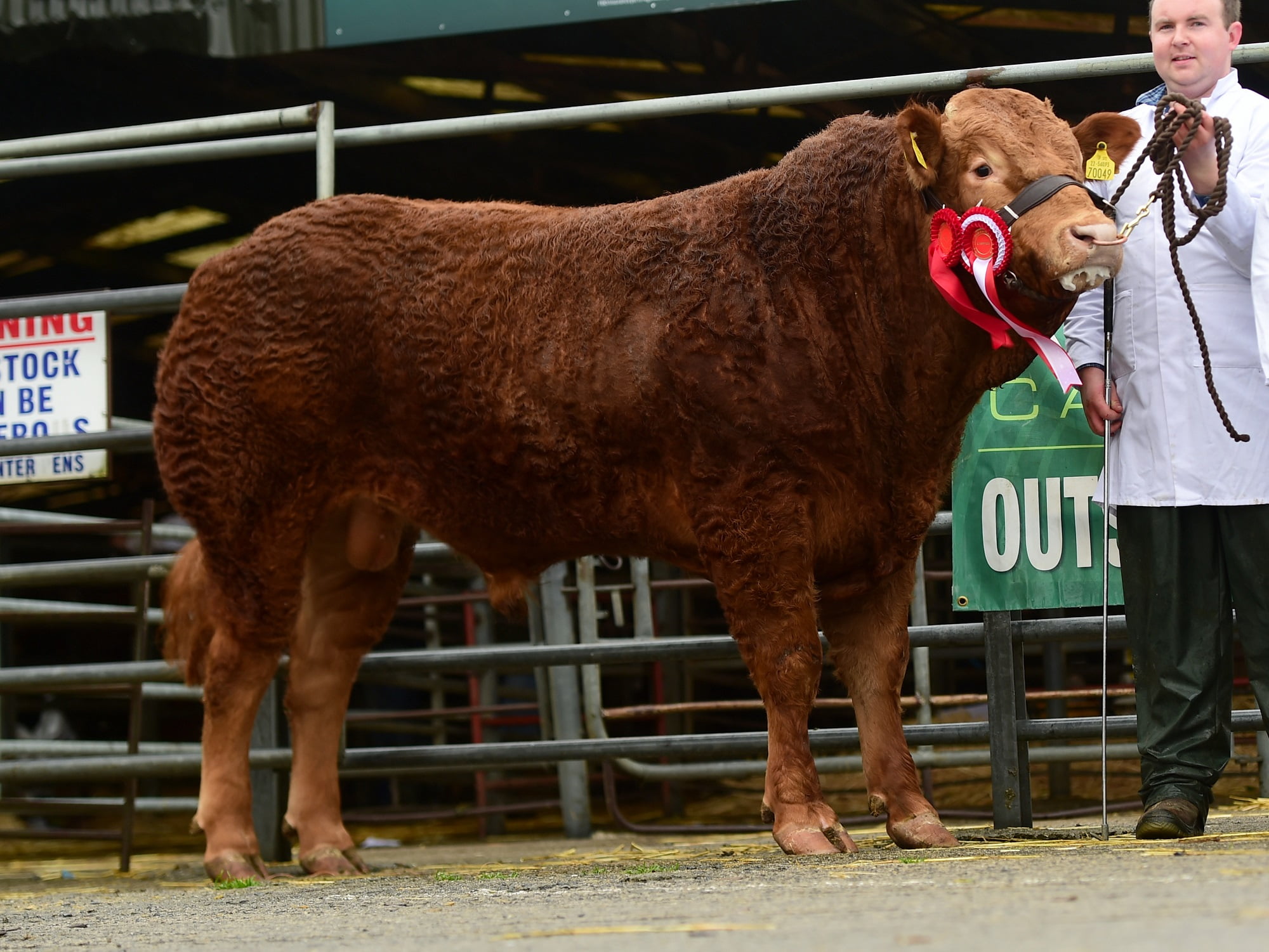 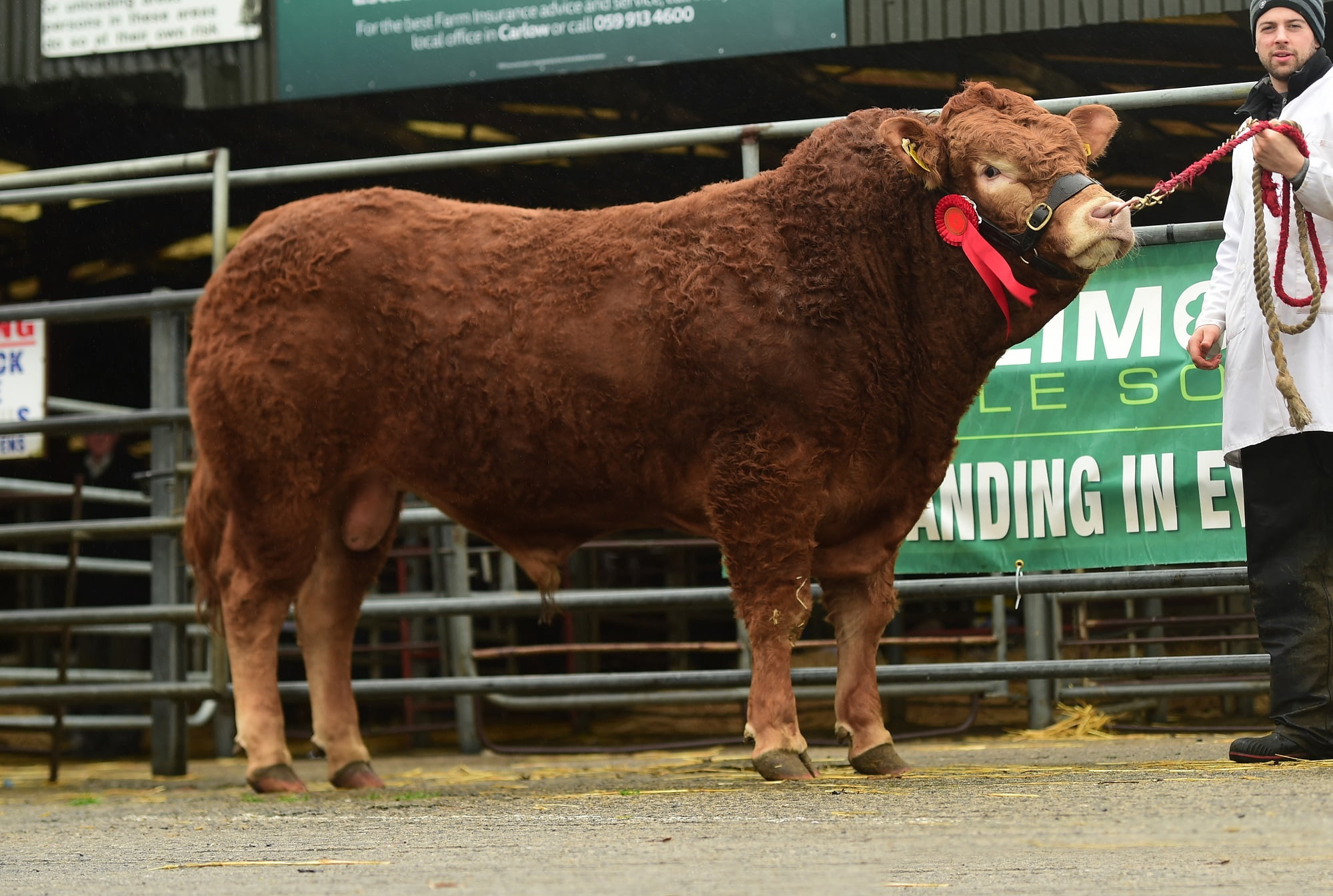 Lot 7. The multi-starred Haltcliffe Gunner (S1608) son Stragheglin Mark also found a new home at €3,000. Mark’s dam Stragheglin Evon has Jeansonnet and Dauphin in her lineage. Nineteen-month-old Mark was bred by Ciaran Bogue, Belturbet, Co. Cavan. He was acquired by David Burgess to run with his herd based in Rathvilly, Co Carlow. 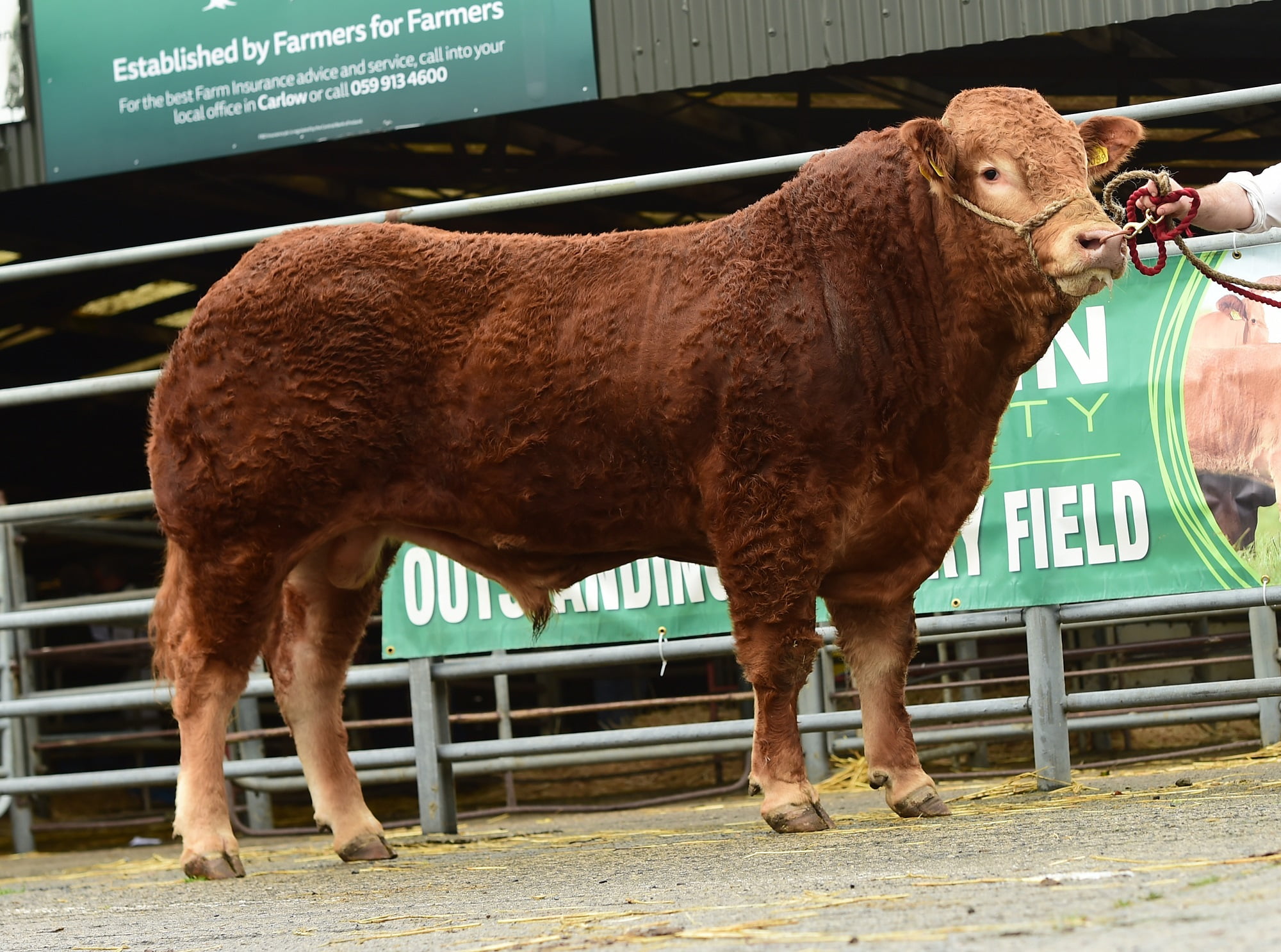 Lot 13. Templequain Maverick from the herd of Thomas & Brendan O’Shea, Portlaoise, Co. Laois was purchased by Thomas Driver, Tiltegan, Co. Wicklow for €2,700. Maverick is a second prize winning son of Sarkley Herald (S2266) and the home bred Templequain Emerald, a Milbrook Tanko daughter. Maverick has a Replacement index of €82 and a Terminal index of €108.

Lot 4. Selling at €2,400 was Begsrieve Milly from the herd of Dermot Rowe, Navan, Co. Meath. Milly has Cameos (LM2191) and Ozeus in his sire stack. With five-star ratings in Terminal index, Carcass weight and Carcass conformation, fourth prize winning Milly was purchased by Sean Murphy of Kiltegan, Co. Wicklow.

Lot 16. The Reserve Champion bull Maythorn Mickey was bred by Martin McConnon, Carrickmacross Co. Monaghan. Mickey is a son of Edakkya (LM2242) and Maythorn Diana, a Mas Du Clo daughter. Sixteen-month-old Mickey has a Replacement index of €82 and a Terminal index of €117, he was acquired by James Flood, Borris, Co. Carlow. 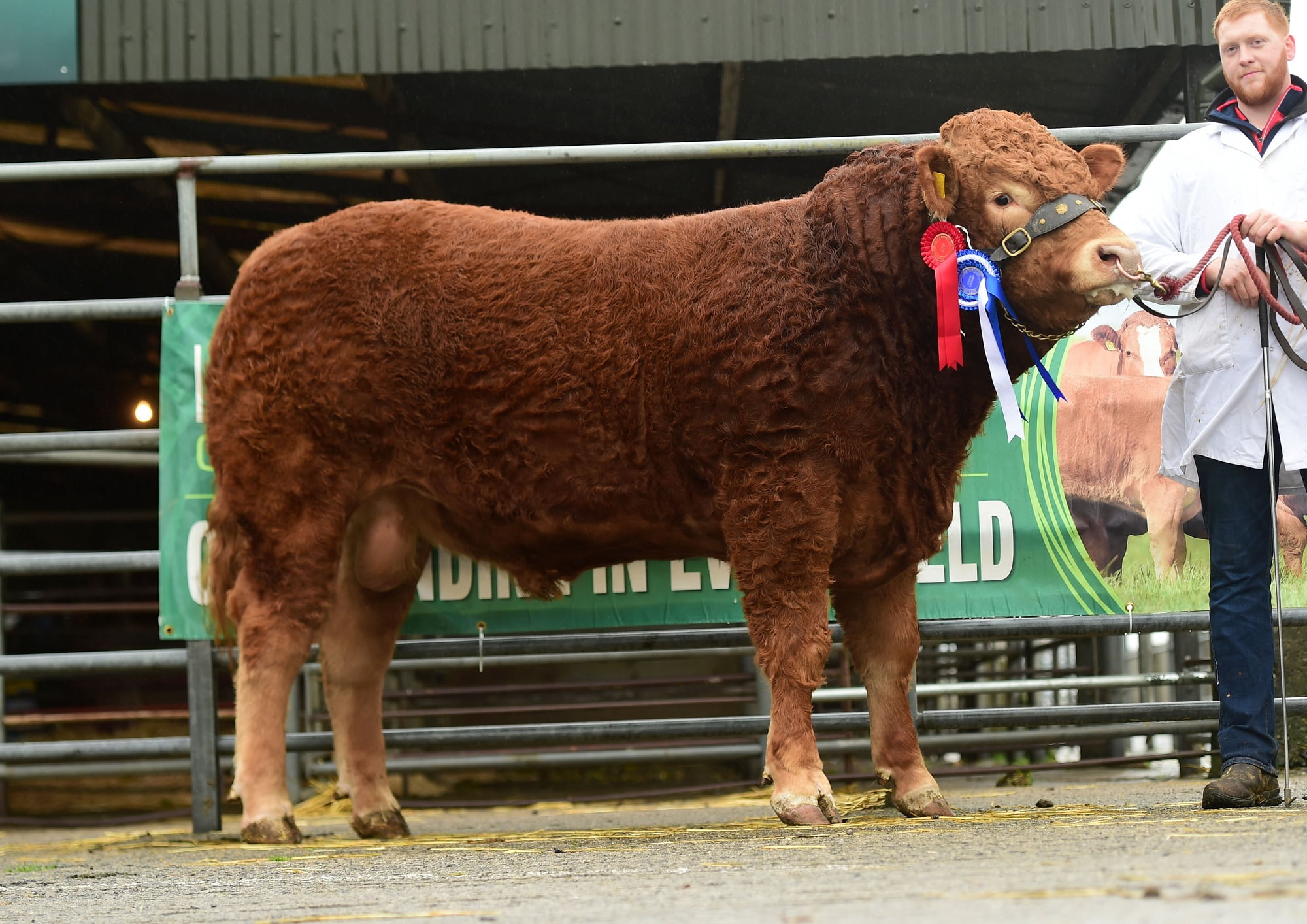 Lot 9. Tanderagee Master sold for €2,200. Master is a May 2017 born son of Liscarn Ideal and Tanderagee Grape. He boasts five-star ratings in Terminal index, Docility, Carcass weight and Carcass conformation. He was one of two bulls offered for sale by their breeder Malachy Hennessy, Enfield, Co. Meath. He was acquired by Sean Murphy, Kiltegan, Co. Wicklow.

The only female on offer was Keltic Larkspur. This two-year-old daughter of Mereside Jester sold in calf to Lodge Hamlet. Her dam Keltic Joy is a daughter of Ampertaine Commander. Larkspur was bred by Teleri Thomas, Enfield, Co. Meath. Ann Dalton, Portlaoise, Co. Laois purchased Larkspur for €2,100. 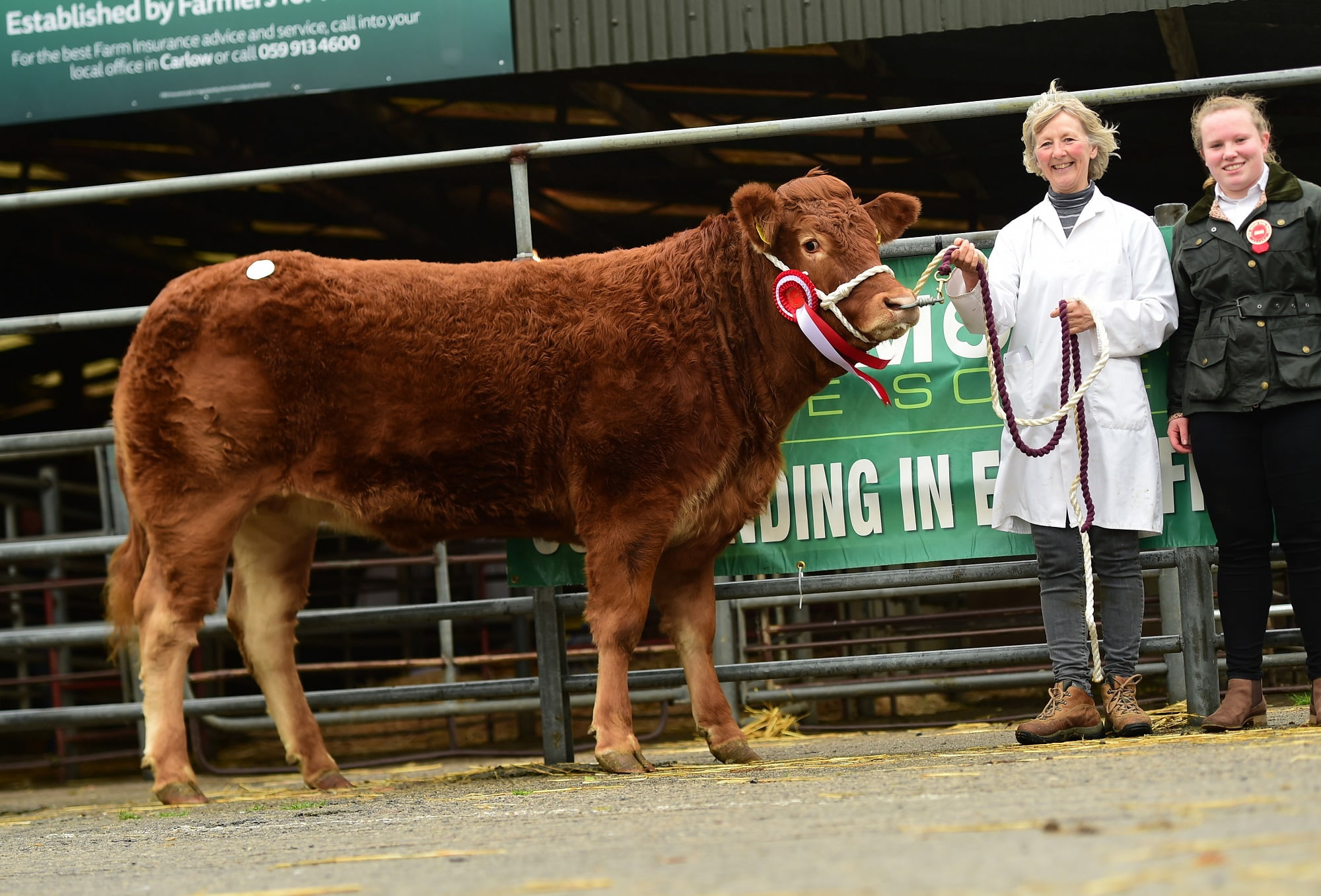 The next Irish Limousin Cattle Society show and sale will be held in Tuam on Friday evening the 30th November 2018. On offer are 52 bulls and 20 heifers – including a consignment of 10 heifers from the Shannon herd of Sarah McElligott.