Day by Day at the International Limousin Congress 2018 – Denver Colorado

Some pictures from Denver of the past five days of Congress 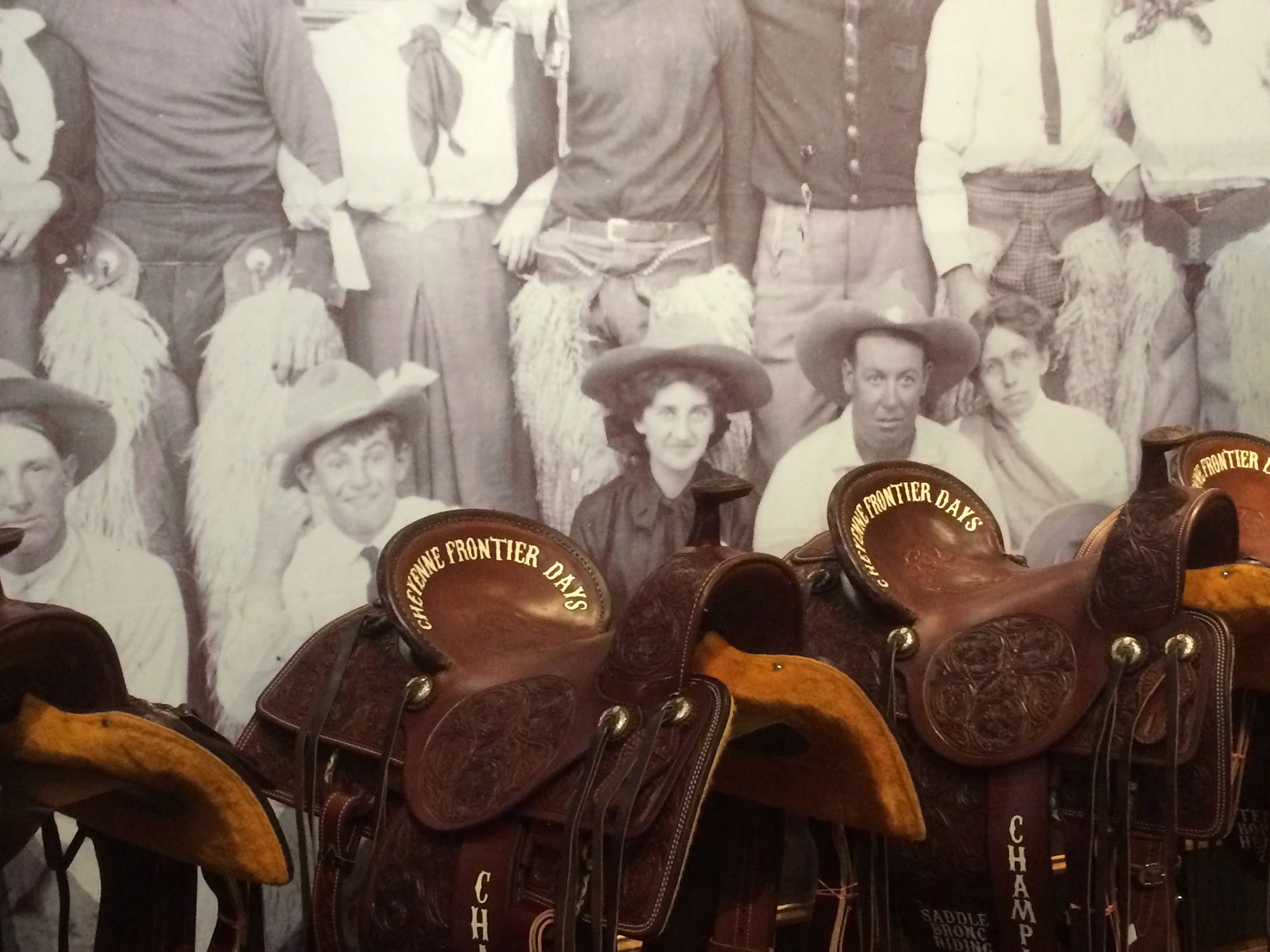 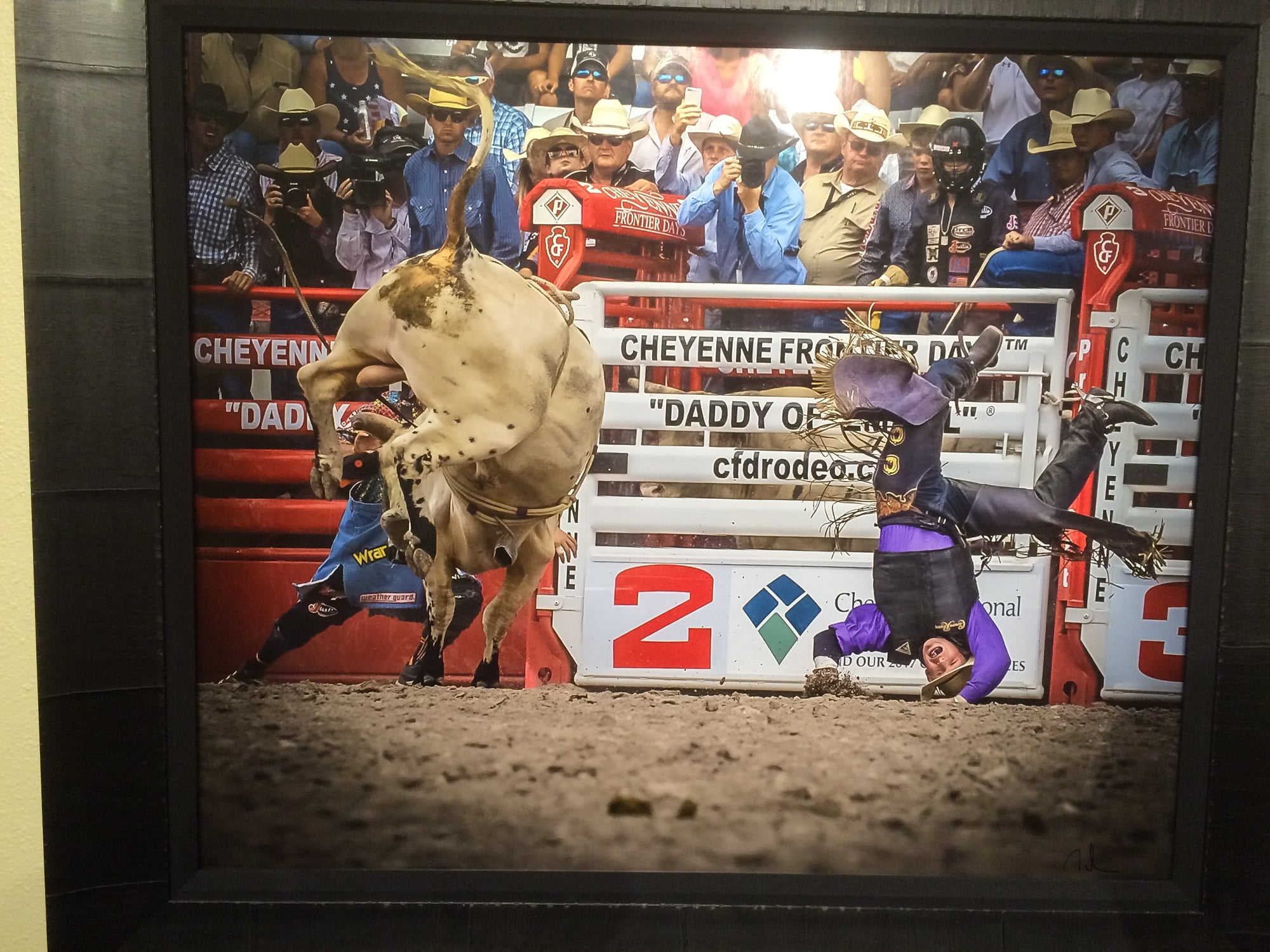 We had an early start this morning, we traveled to have a pancake breakfast to mark the annual Cheyenne Frontier Days. 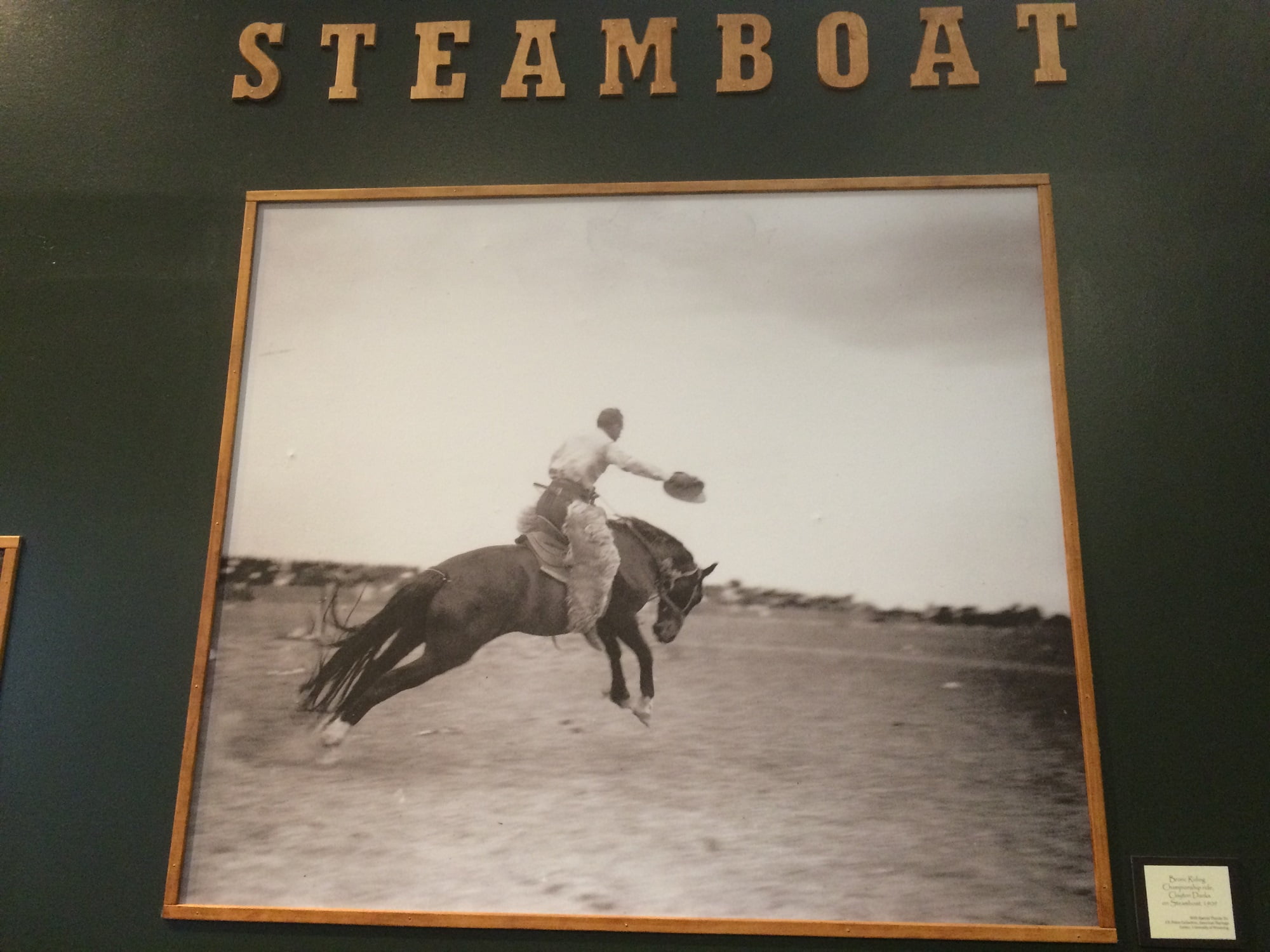 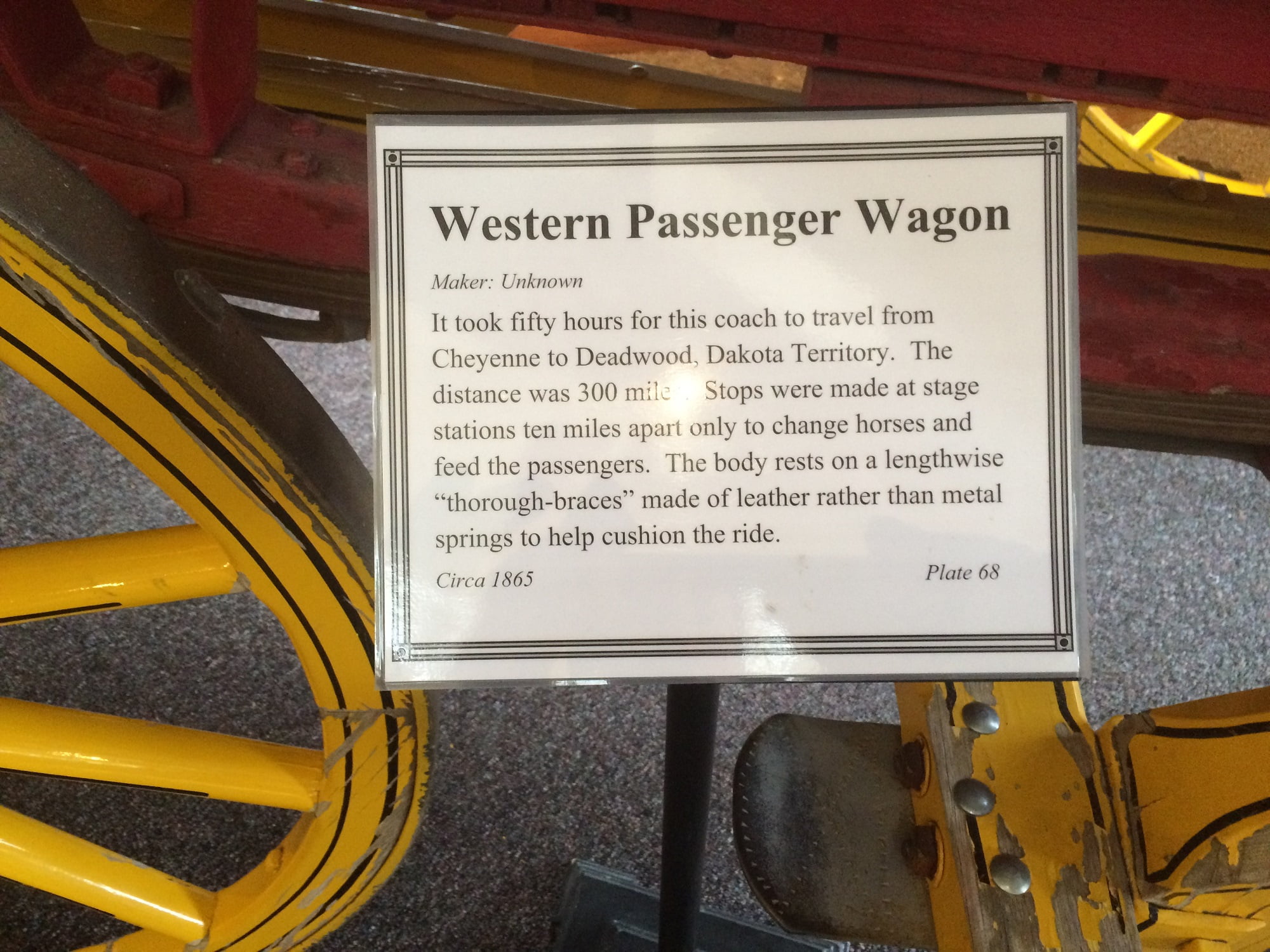 Today started with a visit to the Ochsner Limousin herd where we met Kevin and Julie Ochsner along with their three children Caitlin, Ashlyn, Colin and Kevin’s mother Roberta.
In 1971 the Limousin bull Eclaire was used on Angus cows, today the herd consists of 125 cows with 60% of them being LimxFlex.
The Ochsner farm is a satellite farm for the Wulfe Cattle Company with the top end of the cattle going back to this company.

With only 12 inches of rainfall annually irrigation is again critical with the water rights on this farm going back to 1884. The main crops used are maize, silage, hay and alfalfa.
We learned from Kevin that the German meaning of the name Ochsner is the raiser of cattle and this is very apt for this farm with everybody passionately involved.
Calving is mainly based with a small portion of the herd autumn calving mainly for showing purposes.

The farm has 215 acres of irrigated grass and 6,000 acres of dry ground for extensive grazing. 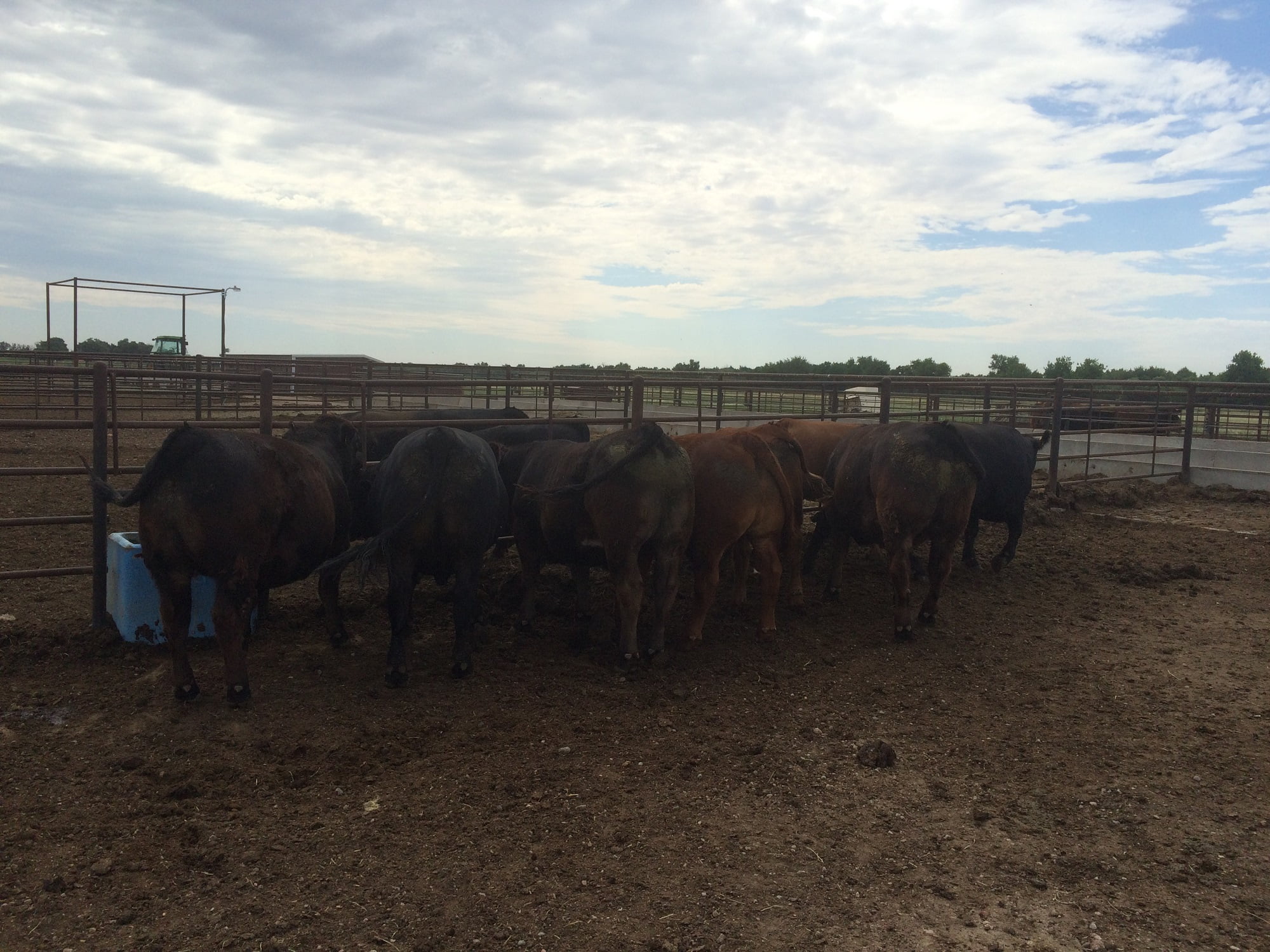 In the paddock we saw the main herd  with the stock sire Wilf Zeke, when asked about the price of purchasing bulls the range was between $8,000 and $35,000. 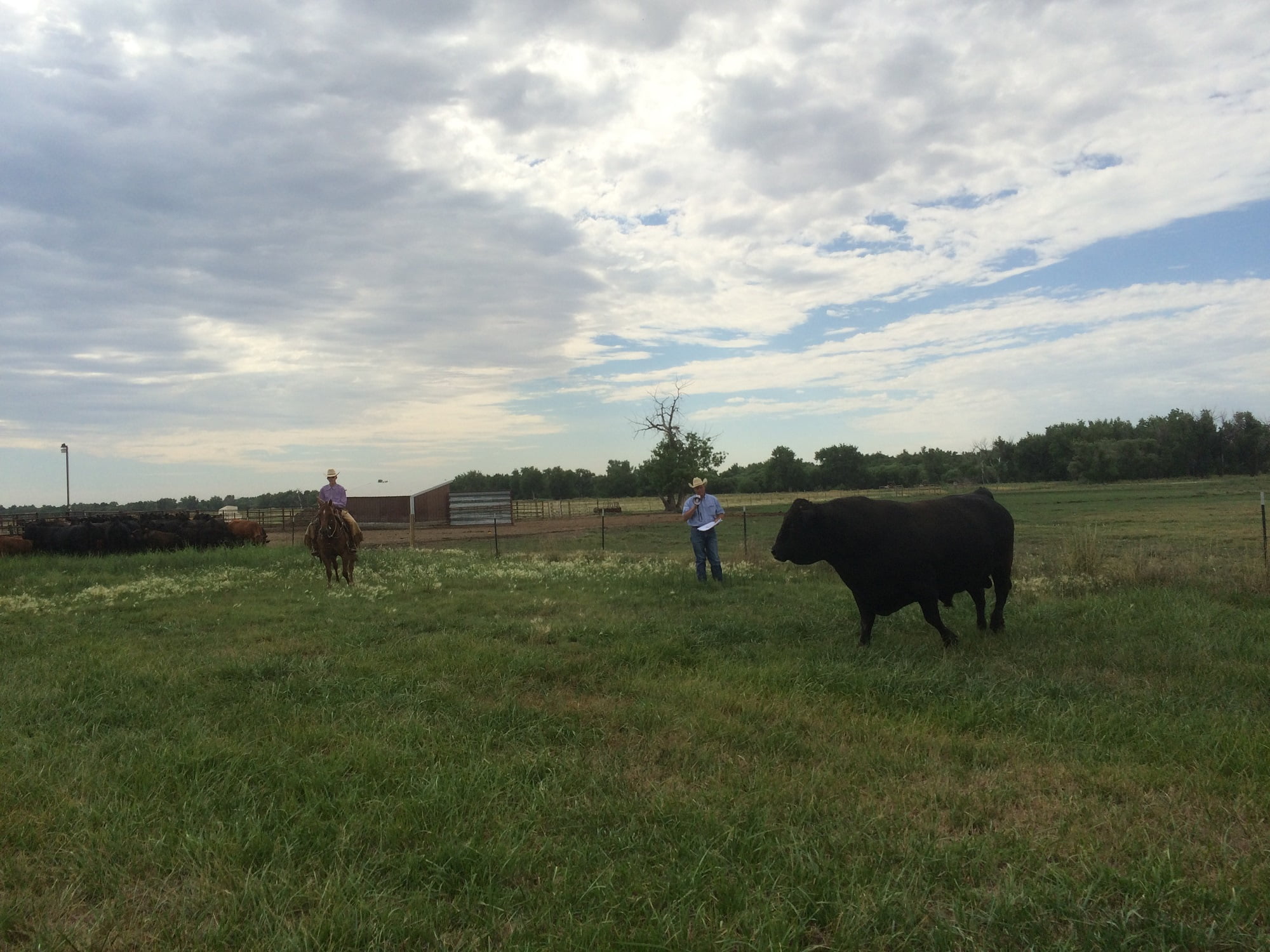 EPDs are used but not an important in the show side of the operation.
Julie Ochsner runs a small beef branding business where she markets home bred cattle to customers mainly from the surrounding neighbourhood and Denver City. Julie explained how a number of people can buy a carcass together which is known as cow pooling. 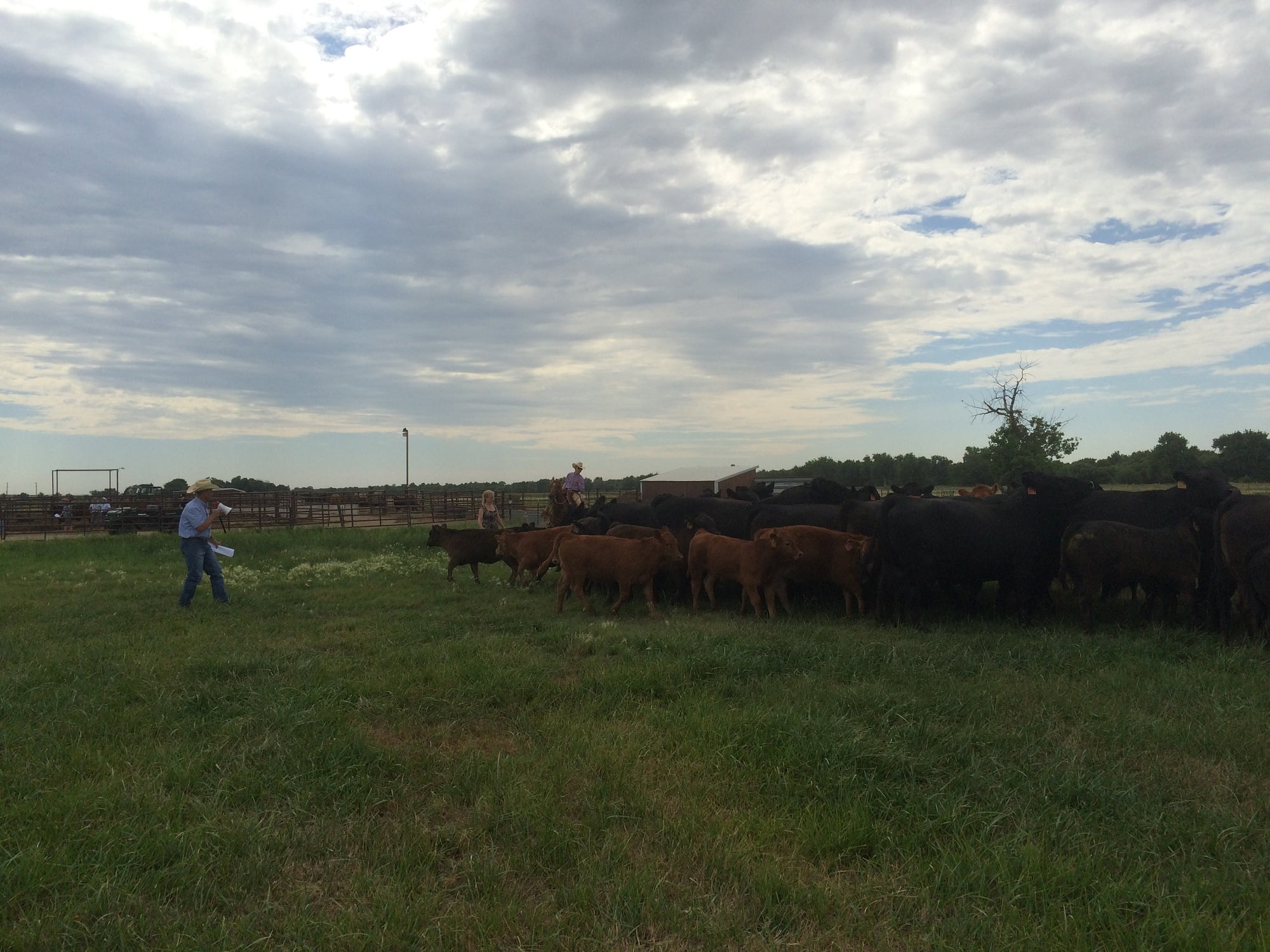 The cattle are fed a 14% ration up to slaughter, carcasses are hung for 21 days, kill out is between 60 and 65% with a range in weights from 611lbs to 957lbs, ideally Julie likes a carcass weight of 760 lbs.
Caitlin, while having a deep interest in farming and showing is away studying music in Nashville. Ashlyn is fanatical about showing and has been very successful, we heard about the intensive programme which in involved in showing. Likewise her younger brother Colin carries the same enthusiasm and is both an accomplished show man along with being an experienced cow boy, we were privileged to see a demonstration of both Colin’s horse riding and roping skills. It was interesting to hear all three children’s passion for their young members association and how it had resulted in some great friendships being forged.

It was a pleasure visiting such a knowledgeable and hospitable family and we wish the family every success. 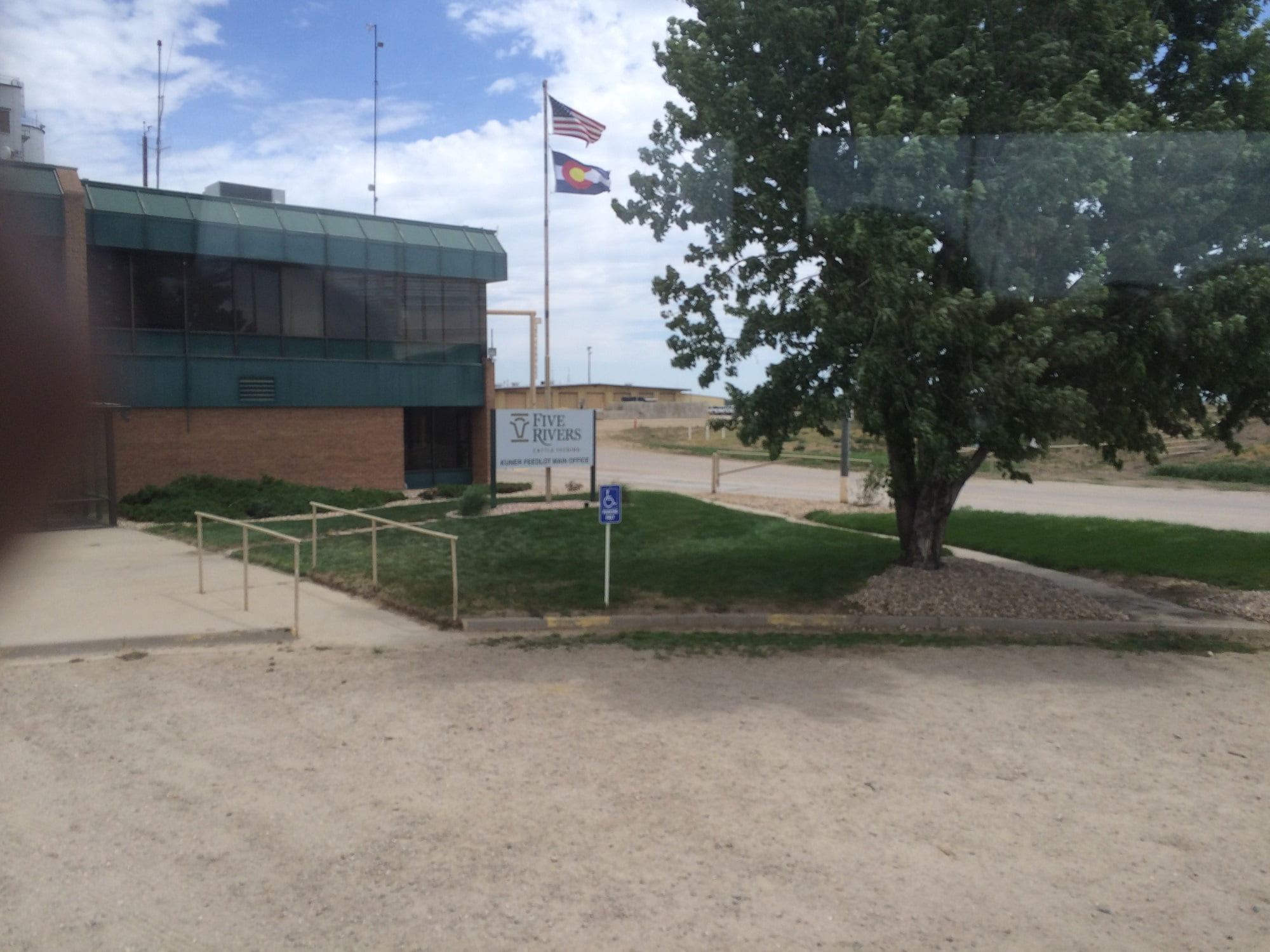 After leaving the Ochsner farm our next stop was Five Rivers Feedlot which is one of 11 owned by the same company. In total the company has the capacity to feed 900,000 cattle annually and employ 600 people. The Five Rivers feedlot is 2.5 miles long x .5 miles wide and has 56 miles of feeding space. 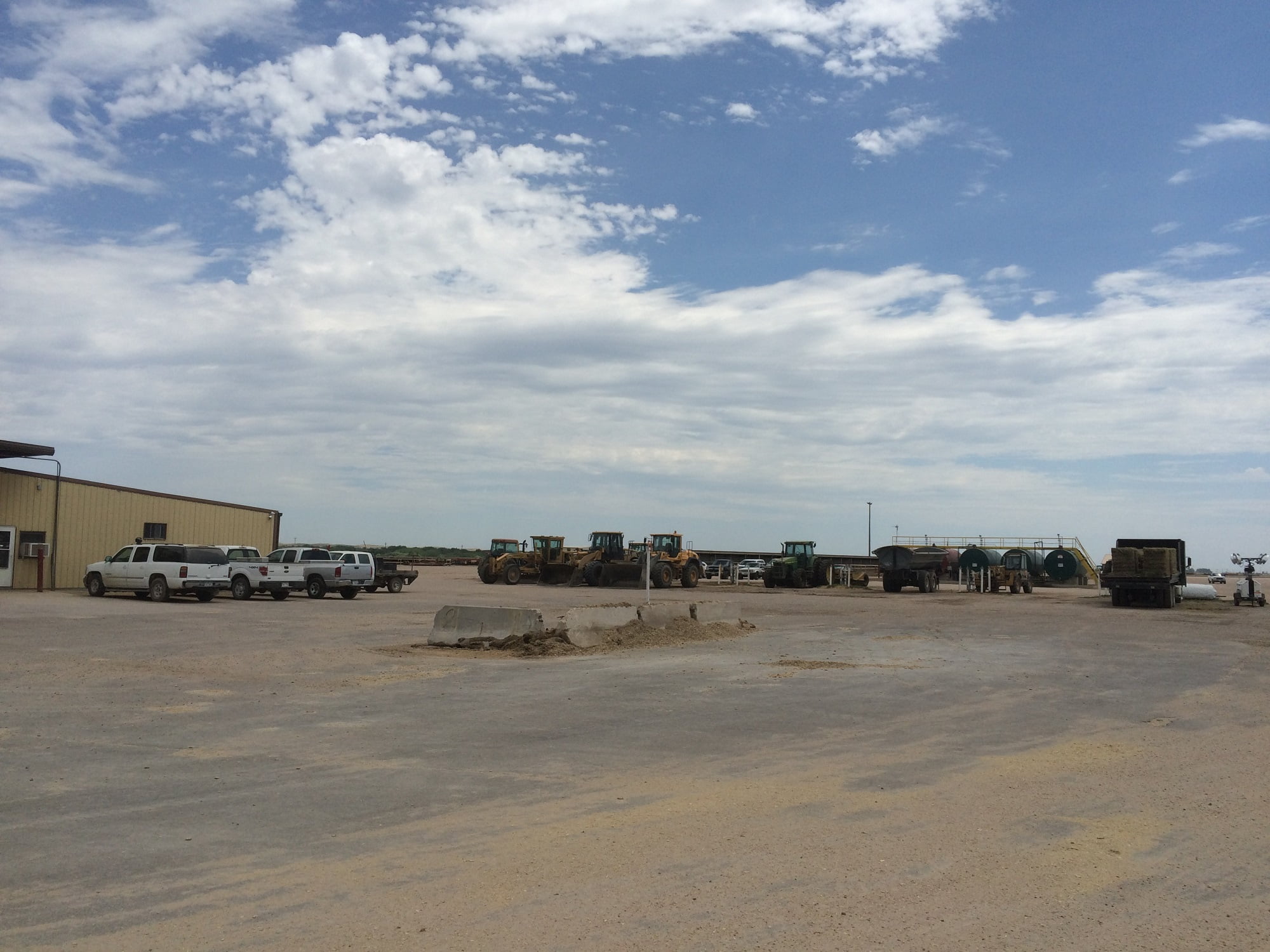 The feed mill was built in 1974 and is now fully automatic. This feedlot feeds 2.8 million lbs of feed daily to 90,000 head of cattle. Drones monitor the cattle along with Cowboys on horseback. 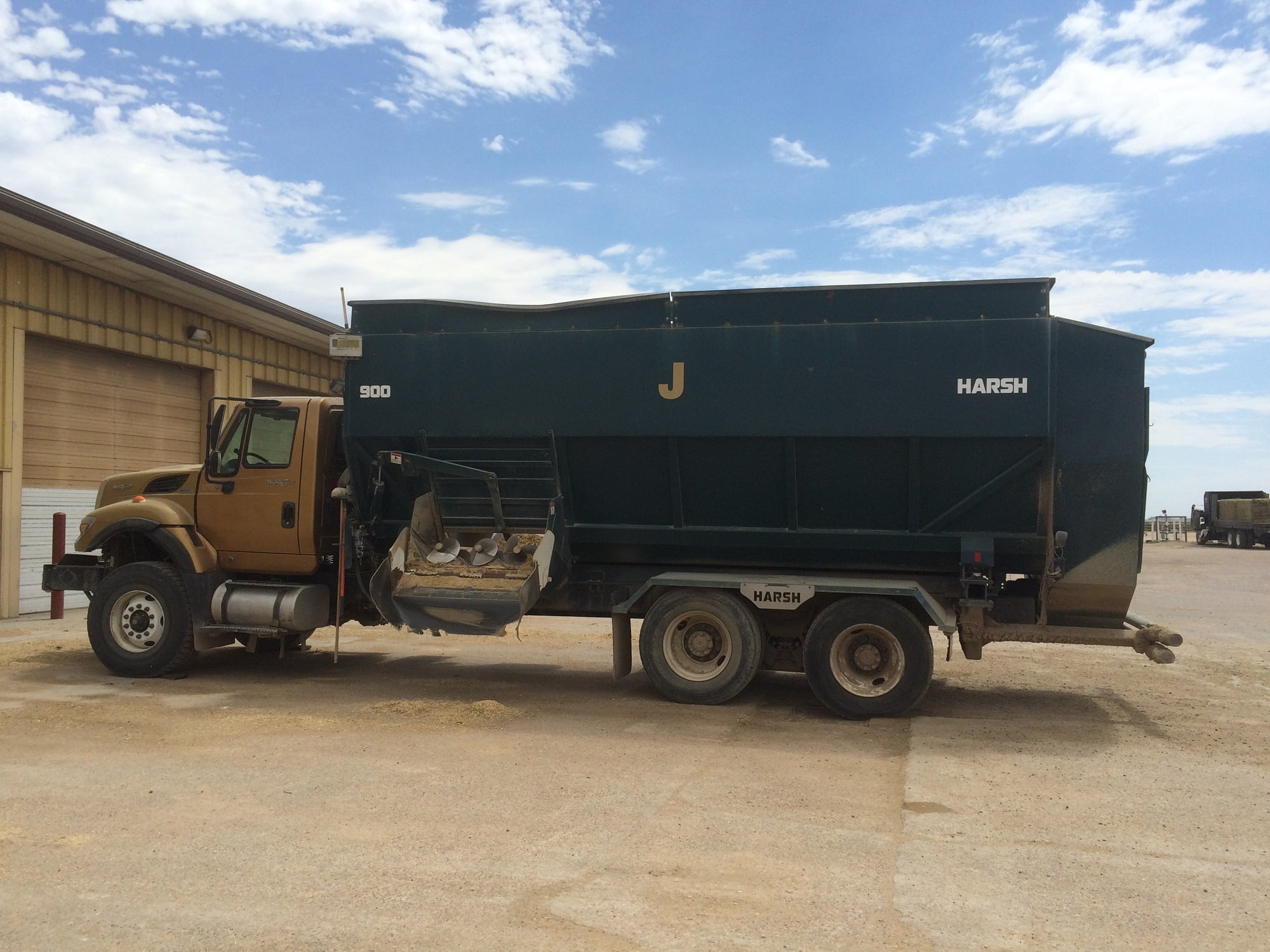 The diet fed consists of corn, whey, fat additives, ground alfalfa and hay which is fed by a fleet of feed trucks which each make 100 trips daily of 20,000 Ibs. 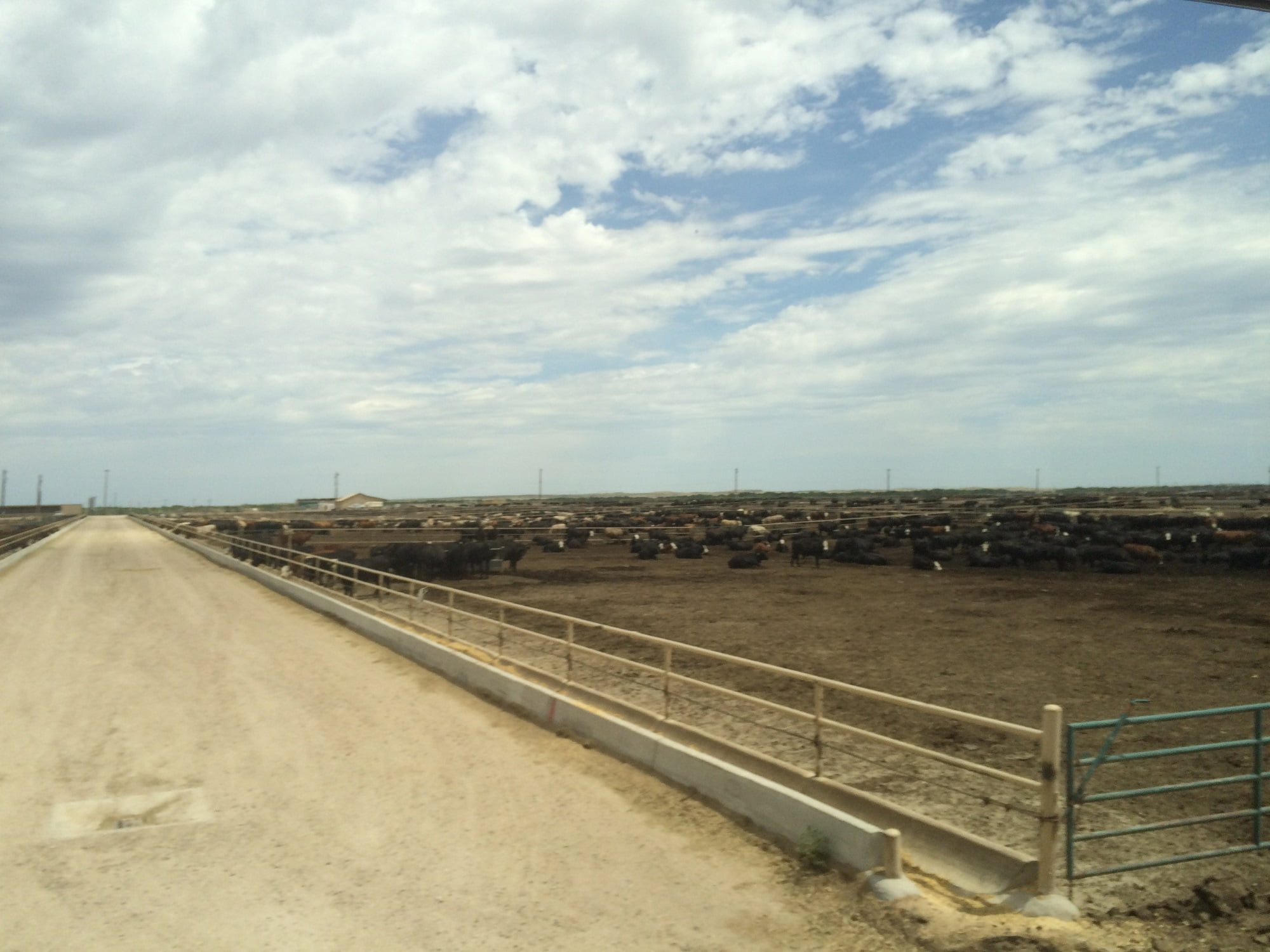 Cattle are bought in from all over the states and Mexico. On arrival they are rested before being vaccinated and assigned a pen.

The magnitude of this operation with its efficiency was a sight to behold.

After the feedlot we visited a a subsurface irrigational efficiency project which is a subsurface drip irrigational system. Basically what this system does is rather than irrigate overground where water  is wasted through evaporation – the water is distributed through a system of pipes situated 12 inches in the ground and 40 inches apart. The pipes drip feed the root system and can also be used to fertilise the crops. This system is being trialed for agricultural, municipal and recreational purposes.

Our next stop was a traditional hat making factory which is  famous for particularly its cowboy hats the Greeley Hat Works where we were taken for a tour of the the facility. We enjoyed refreshments here and were entertained by a couple based in Nashville.

Then our evening meal was at Platte River Fort which was another traditional fort. At the fort we partook in a series of games. During dinner we listened to a lecturer from the university who specialises in meat eating, we tasted a number of steaks and had to vote on our choices. We were entertained at the fort by Caitlin Ochsner singing and by her brother Colin’s cowboy skills.

Then after saying our thank you it was time to head back to Denver.

Day 3 – Estes – Gateway to the Rocky Mountains and Magness Ranch

Today started with a visit to the town of Estes which at 7500 ft above sea level is known as the gateway to the Rocky Mountains. With panoramic views and only 90 minutes from Denver City is a very popular tourist destination.

After leaving Estes we travelled 60 miles to the Magness ranch where we  met by Mark Hathaway and his friendly staff including Austen who was our tour guide for the visit. 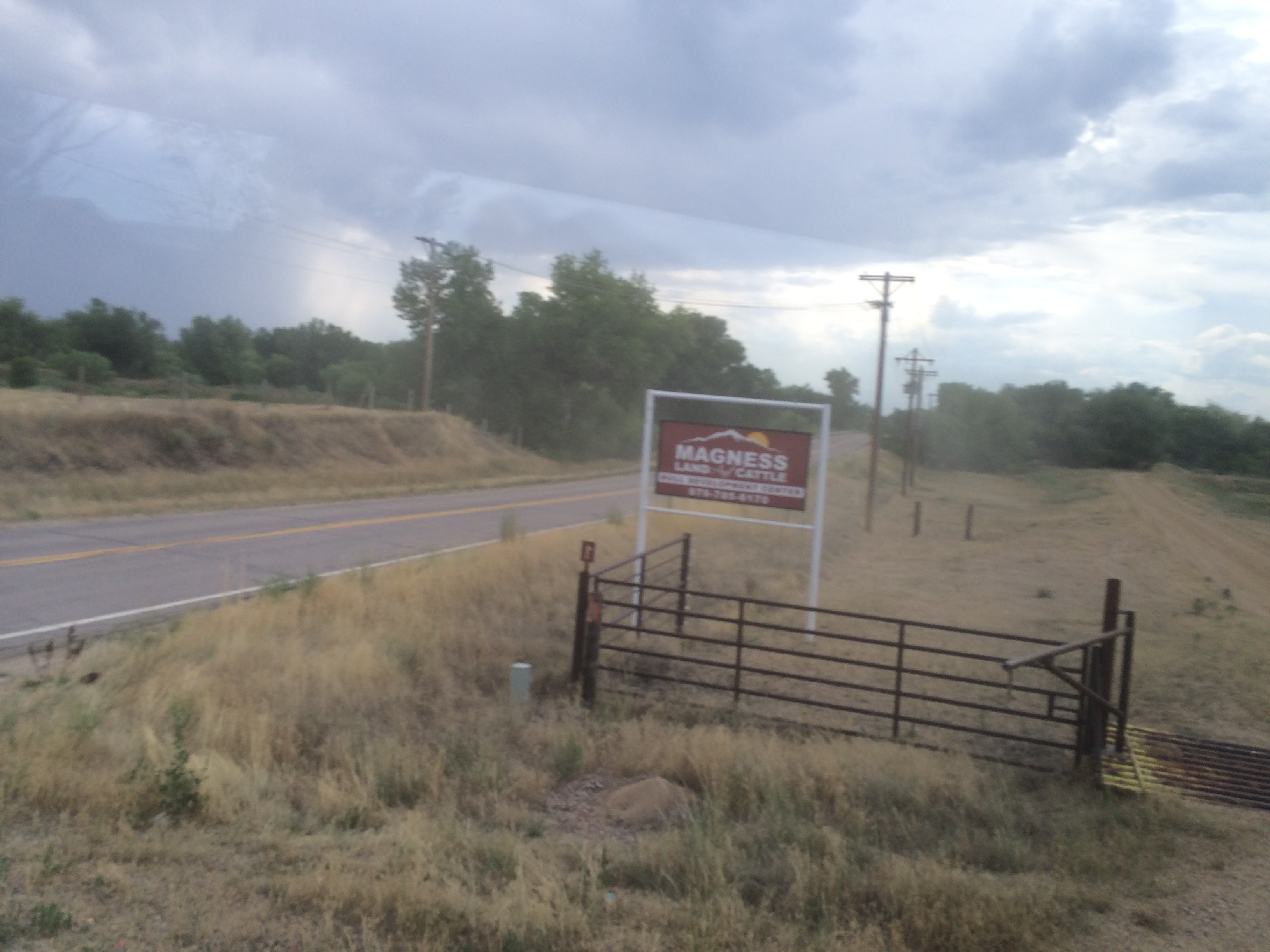 Magness Ranch consists of 3000 acres and carries 450 cows along with their calves and the previous years calf crop. The farm has a total staff of nine.

Cows are calved in three groups

Cows calve outside and calves are only every brought in if it is extremely cold before being turned out again. Any bull calf with a birth weight of over 95lbs has a band on his testicles as heavy calves correlate to hard calving.

This herd is totally black and produces bulls for breeding. If the cows don’t go back in calf within a reasonable period they are either culled or if good genetics flushed or used as recipients.

Calves are genotyped to check their status in particular to check for homo polled and homo black. If an animal is homo black it will qualify for the Angus premium, a homo polled animal (with no horns) won’t damage other cattle  when they are travelling to slaughter.

On this farm the aim is to wean calves once they reach weights of 50% of their dams body weight. Generally calves are weaned at eight months. By this stage bulls will weigh between 700 to 900lbs, with heifers weighing 500 to 700lbs. Calves are weaned but let suck their mothers daily for five days before complete weaning.

Weaned calves receive a mixture of corn, alfalfa and hay. All animals are weighed at 1 year old and scanned for rib eye on the 13th rib. The yearling young bulls testicles are measured on – sizes of  between 36 and 38 cms are the norm. These bulls will eventually be the seed stock for commercial farmers.

Cows are kept in groups of 40 and after being served firstly using artificial insemination are placed in paddocks with  a stock sire. These paddocks are fenced with six strands of electric fence. 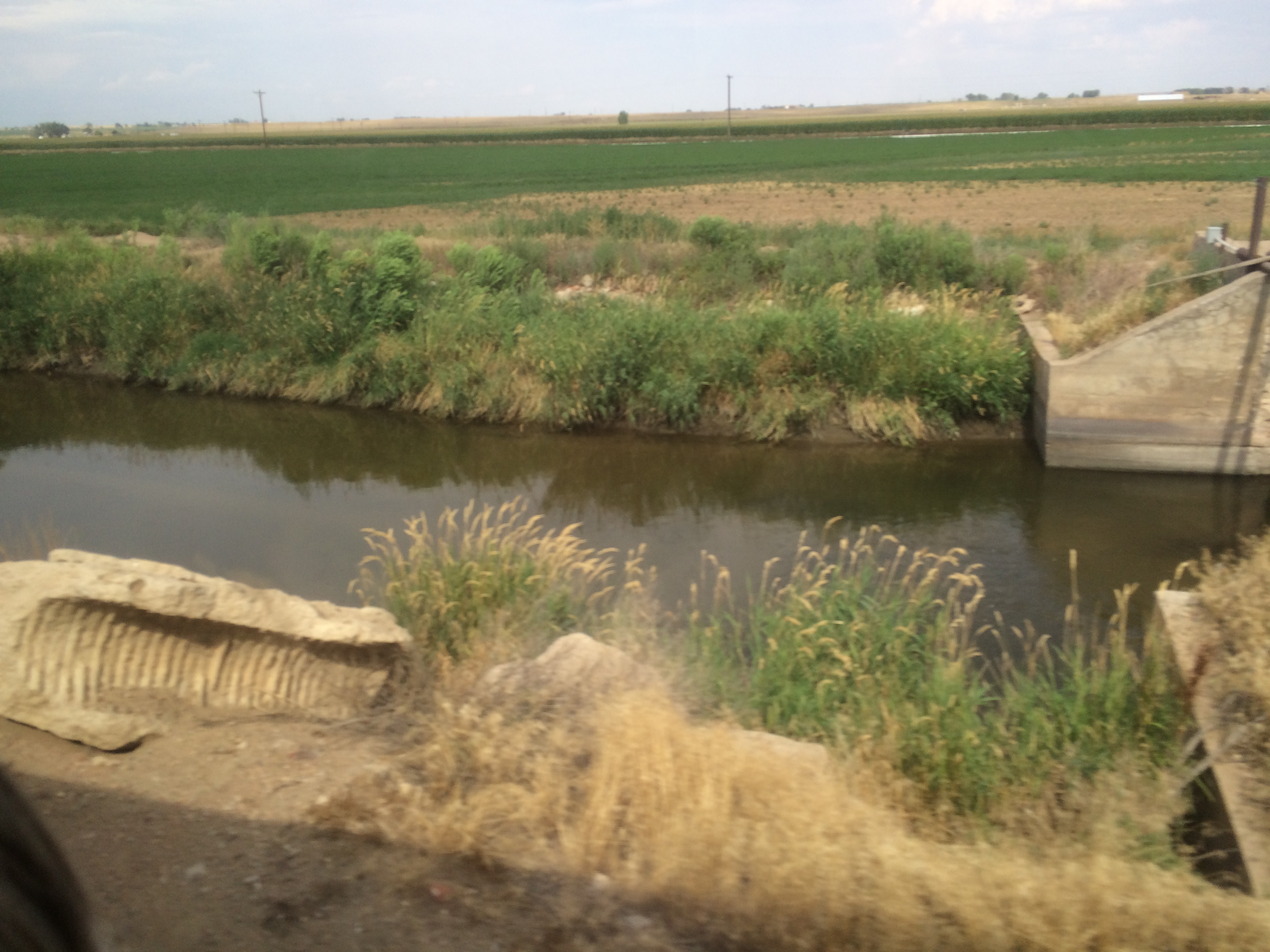 Irrigation is critical to this farm – it couldn’t function without a continual irrigation system, water rights are more valuable than land itself. Crops sown are maize, alfalfa, grass. Four crops of each are harvested with two maintained for farm use and the other two sold to mainly dairy farmers.

We enjoyed our visit and would like to thank Mark and his staff for their kind hospitality and for imparting so much of their knowledge of their farming system to us.

Today, Friday 20th July we attended the Futurity Show at the National Western Stock Show facility where we had breakfast.
We were addressed by Randy Blach, CEO of Cattle Fax, whose function is market analysis of commercial cattle in the states. Randy originates from a family who were homesteaders back in the 1880s. We learnt that USA is the largest beef and poultry producer on the planet along with the 3rd largest producer of pork.

The US has 32 million cows in beef herd and 9.5 million dairy cows.
Cattle are finished on a mainly grain diet over 150 to 200 days, the reason for the long finishing period is to produce a higher marbling product.
eat industry consists of 70% retail and the other 30% going to restaurants &, services such as schools, hospitals with the remainder exported.
2018 inventory of cattle is similar to 1954 but beef production is 2.2 higher. Average carcass is 280lbs heavier than 1970’s. From 1970 to 1980 beef was the no. 1 source of protein in the U.S. However, between 1980 and 1998 demand fell by 50% due to the fact people didn’t like what was being produced. In 1998 beef demand  began to rise due to an increase in quality coupled with consistency, the message being simply “You must listen to the consumer”.
Twenty six to twenty seven million head of high quality steers and heifers are slaughtered annually. 87% consumed in USA with 13% exported. 650,000 kill per week.
In 1980 no beef was exported and now 16billion lbs is exported. If this meat wasn’t exported every man, woman and child would have to consume an extra 41lbs of beef.
The main export markets are Asia with China, Japan, Taiwan and South Korea taking large volumes.
It has taken the USA beef industry 20 years to improve the quality of their product, 80% of the product now grades prime choice compared to 56% in 2005. There is a differential of $35 per 100 in a 880lbs carcass where it grades prime quality. Genetic selection has been used as a tool to influence the percentage of prime beef. $350 per head of animals is generated from global markets.
The market has seen that when incomes improve meat consumption grows.

The main message of the talk was you must listen to the consumer and produce what they require.

Following the breakfast talk we watched the show in an excellent event centre (the show has been dubbed “Colorado Christmas in July”). Twenty eight classes were judged by a very experienced judge Chris Mullinix, Manhattan, Kansas. Chris had been an ex college graduate who had been through a very comprehensive training programme like his fellow contemporaries where they have to partake in all aspects of showing. 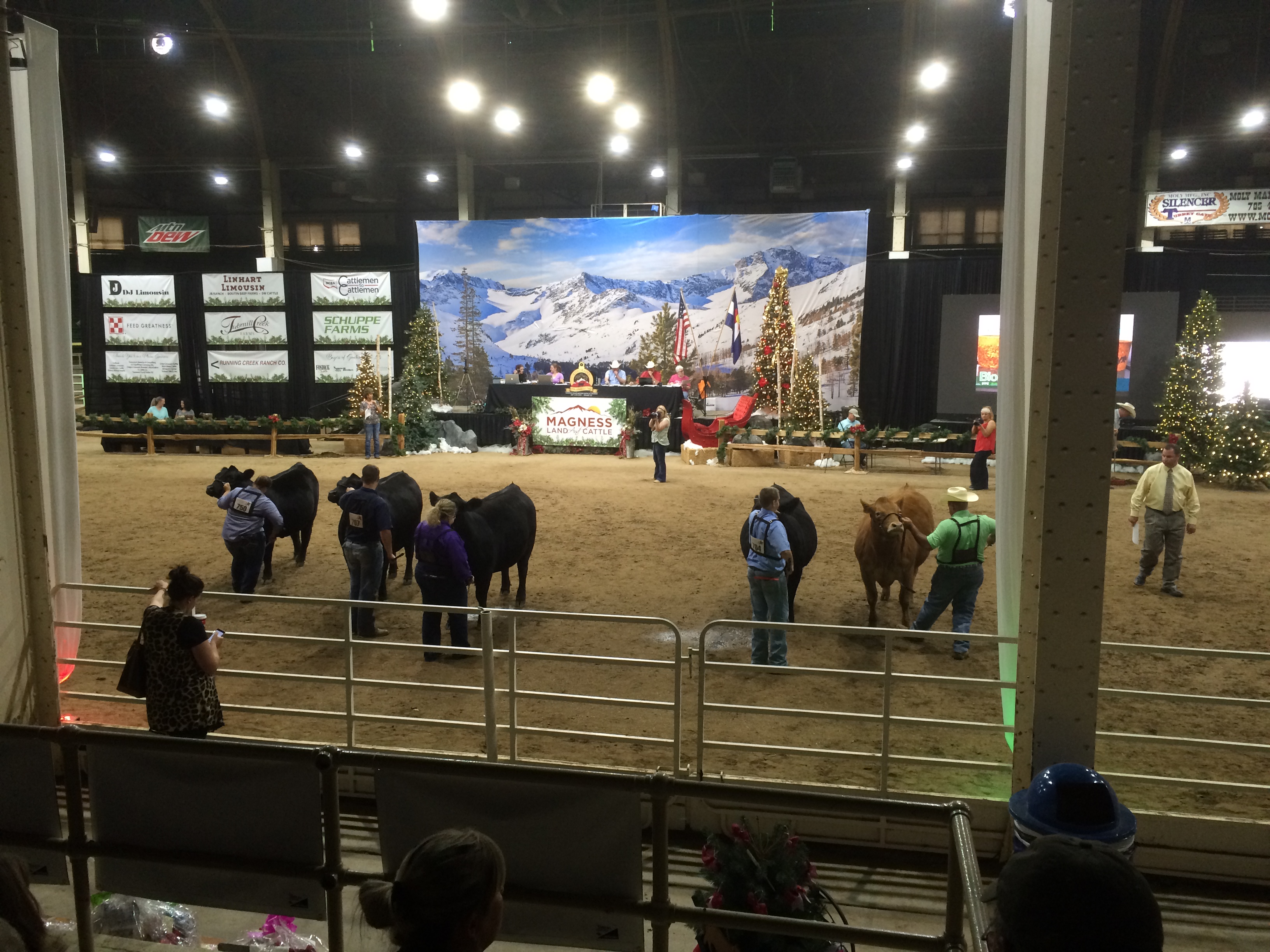 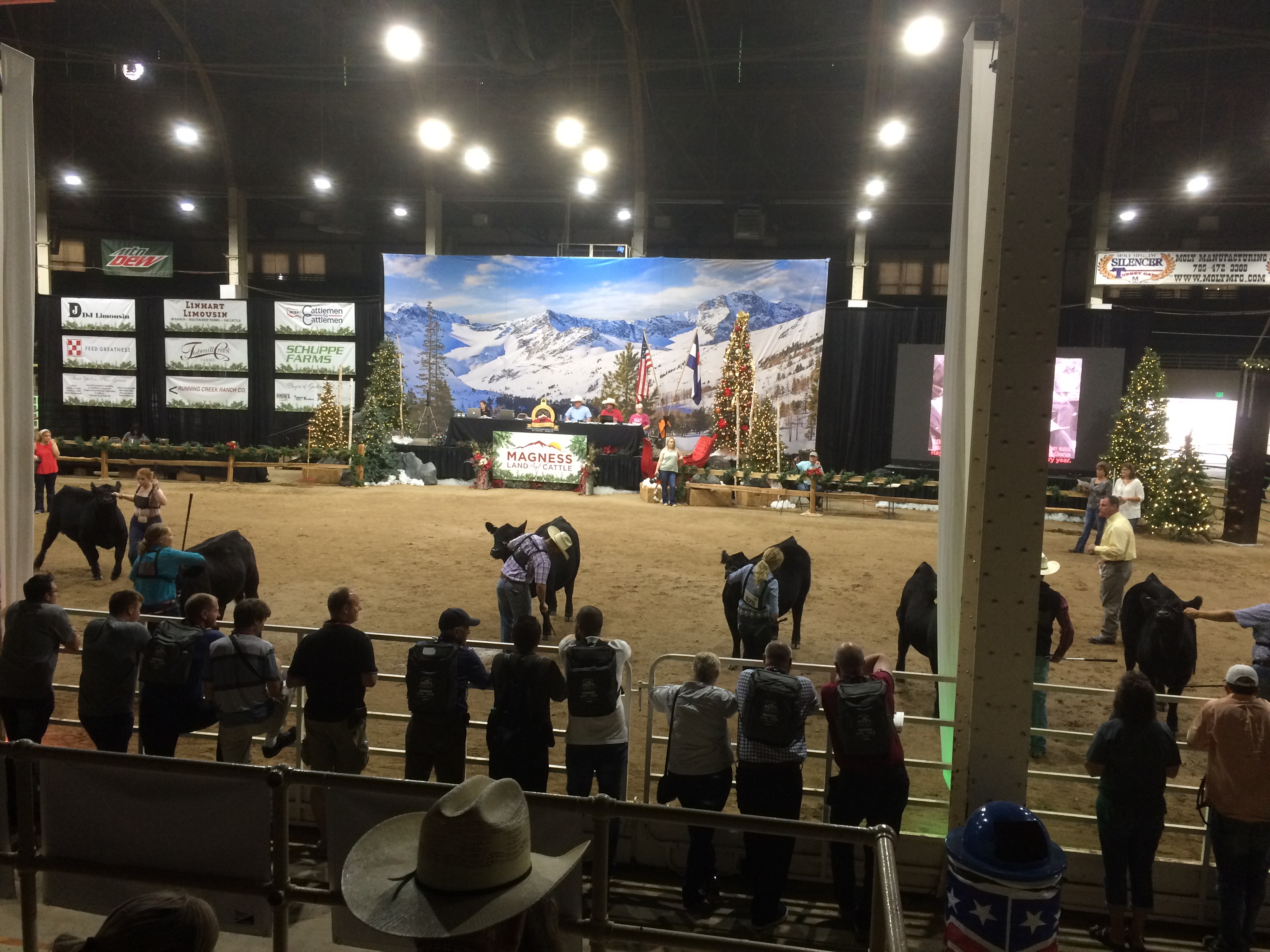 The classes were dominated by black polled Limousin which were to a type with good structure and deep bodied. Conformation and size would have been different to the Irish show scene. Cattle were predominantly shown by young people who had been at the centre all week – participating in disciplines such as stock judging, public speaking, team work, arts and crafts, showing . This week together was evident in the friendships that have been forged and how they keep in regular contact with each other.
During the show each country was asked to make a short speech and then present the prizes to the class winners, Michael Gunn, ILCS President officiated on behalf of Irish Limousin.

We then departed the show and travelled to an old style American Fort for our evening dinner.

The opening ceremony of the International Limousin Congress was held on Thursday evening the 19th July 2018. The ceremony was held on the 38th story of the function room adjacent to the Grand Hyatt hotel Denver, Colorado – the mile high city.

The Executive Director of the North American Limousin Foundation (NALF) opened proceedings with a brief overview of NALF and the American industry. The beef herd totals just under 32 million cows.

We were then introduced to the main sponsors Alltech which incidentally was founded by an Irish man Dr. Pierce Lyons.

Following on from this interesting presentation we were addressed by Bernard Roux the ILC President who welcomed everyone and thanked our host country for organising and hosting this biennial event.

After a splendid meal and making old and new acquaintances we retired to bed looking forward to tomorrow’s National Western Stock Show.

ILCS Breed Secretary Paul and our President Michael Gunn are in Colorado for the ILC along with some Irish breeders. Paul sent the above synopsis on last nights opening ceremony.