The Reserve Junior Champion Brackan Major scooped the top price at Roscommon show and Sale, held in Roscommon mart on Saturday 19th May. The sale had a clearance rate of 73% of the bulls presented with an average price of €2,951. Brackan Major was presented at the show and sale by his breeder Padraig Gormley, Carrigallen, Co. Leitrim. Born in February 2017, this young bull is a son of Ampertaine Gigolo and Esker-Hill Jacintha Et. With five-star ratings in many traits, Major was purchased by Joe Kelly, Dromard, Co. Sligo for €5,000.

From the same line-up and claiming the Junior Champion was Milbrook Miner from the renowned Milbrook herd of William Smith, Oldcastle, Co. Meath. Miner is steeped in Milbrook genetics – his sire is the home-bred Milbrook Itchyballs, while his dam Milbrook Elisa has Cloughhead Lord and Greensons Gigolo in her lineage. Miner has five-star ratings in almost every trait. He was purchased for €4,100 by Colin Irwin, Tynan, Co. Armagh.

At the same selling price was the Reserve Senior Champion Millburn Lismore from Tuam, Co. Galway breeder Richard O’Beirne. Lismore is a son of Ampertaine Foreman and the Ionesco dam Thomastown Ena. Lismore was purchased by Martin O’Malley, Ballinrobe, Co. Mayo for €3,700. 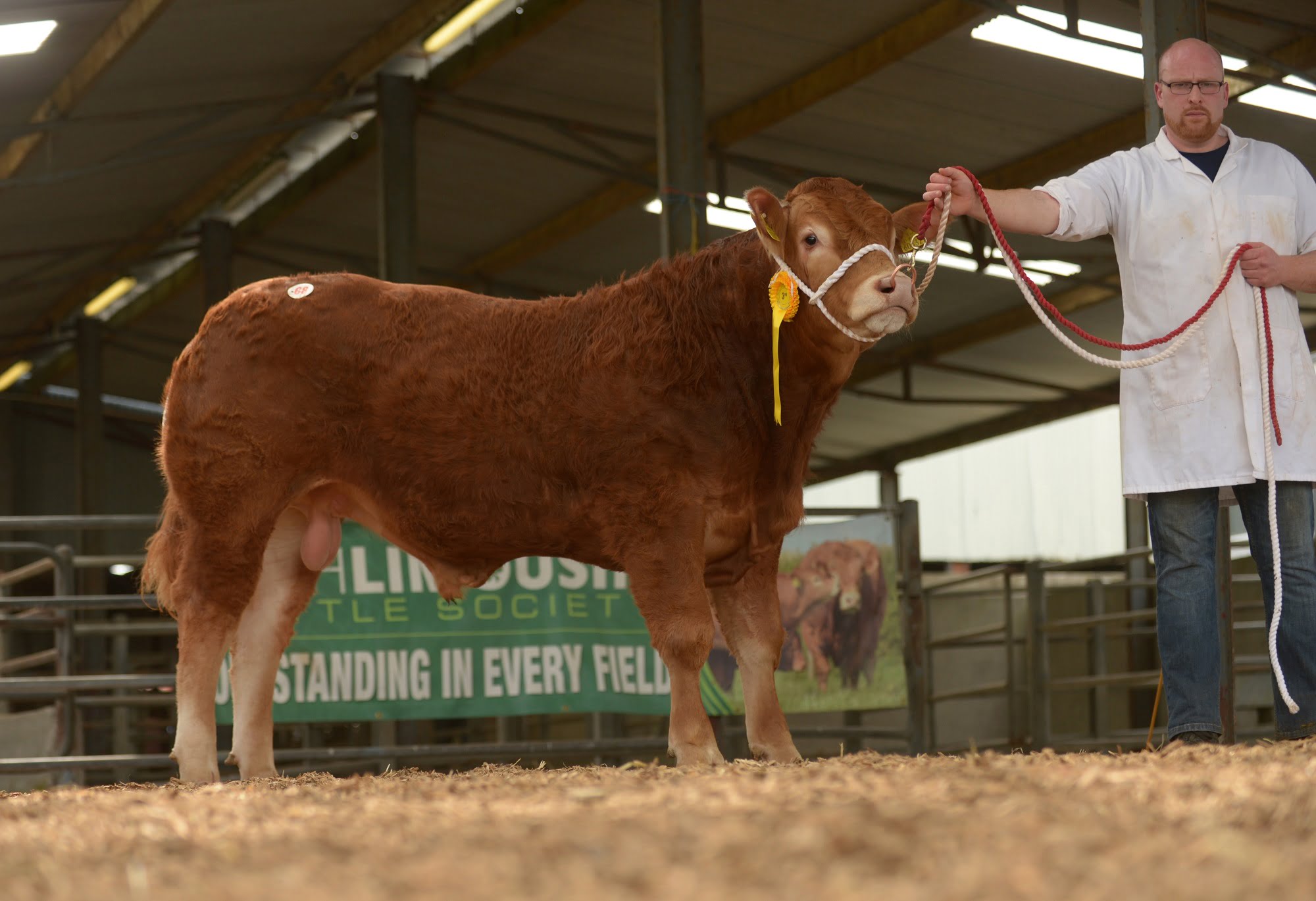 The second bull offered for sale by Gearoid and Padraic Kennedy realised a price of €3,000. Coolrain Luke has Ampertaine Commander, Ronick Hawk and Haricot in his sire stack. Luke was acquired by Colin McFarland, Smithboro, Co. Monaghan.

Also breaching the €3,000 mark was Cross Latino . This November 2016 born bull is a son of Bavardage and the Sympa daughter Cross Herbe. Latino was bred by Tom Feehan, Westport, Co. Mayo, he was purchased by PJ Weir, Ballina, Co. Mayo.

The youngest bull to sell here in Roscommon was Buckfield Mickey. Mickey is a yearling son of Ampertaine Foreman and the Nenuphar dam Annadale Eureka. Mickey, a first prize winner, was bred by John Moore, Westport, Co. Mayo. He was acquired by Josie Regan, Castlerea, Co. Roscommon for €2,700.

A small number of heifers were on offer at the Show and Sale. Judge PJ Smith awarded the Champion Female rosette to youngest heifer in the class, 14-month old Newtown Martini, from Stanley Richardson, Newtowngore, Co. Leitrim. Martini is a daughter of Kaprico Eravelle. She left the sales ring unsold.

Fourth prize winner Carrowreagh Lulu sold for €2,500. Lulu is a daughter of Haltcliffe Dancer and the Cloughhead Lord dam Carrowreagh Caithlin. Lulu was bred in Elphin, Co. Roscommon by Patrick Bruen. She was purchased by Noel Larkin, Ballinasloe, Co. Galway.

The Wilodge Joskins daughter Woodview Lulu sold for €1,900. Lulu was bred by David Abbott, Killeshandra, Co. Cavan. She was purchased by Marty Conneely, Ballyconneely, Co. Galway having won the third prize rosette in the pre-sale show.

Judge at the pre-sale show was Mr. P.J. Smith from county Meath. PJ is a renowned judge having officiated at shows all over the country. PJ commented after the show: “There were nice cattle in all classes presented today – the toughest class of all was the Junior males – these were exceptional bulls with very little to separate them.”

We would like to thank all purchasers here in Roscommon and wish them success with their acquisitions. Thanks also to our judge PJ Smith and our stewards David Swaine and Brendan Curtin. We are very grateful to the management and staff at Roscommon for all their help in the leadup to and during the show and sale.

A consignment of 16 heifers from the renowned Galbally herd of Trevor Masterson, Enniscorthy, Co. Wexford were offered for sale after the Society show and sale. The Galbally herd is one of the largest and most successful in the country.