The renowned Mount Scott Limousin herd was sold on bank holiday Monday 2nd April 2018 at Roscrea Mart. The herd was to the forefront of pedigree Limousin breeding in Ireland since it was established in 1991 by Michael Sexton, Aheybridge, Mullagh, Co. Clare.

With a lot of thought, I have decided to retire and have a full dispersal sale of all my pedigrees. After 27 years of breeding, I have seen many faces, places and changes in this industry but one thing for sure is Limousin still remains number one to me.

As a part time farmer, I have achieved a lot with my pedigrees over the years at numerous shows and sales. One of the highlights was being crowned overall champion at the RDS Spring show 2002 with Mount Scott Percy. He has also won 30 red rosettes and was crowned reserve champion in 2003 both at the Tullamore show and the National Ploughing Championship. Also Mount Scott Tara was another of my animals that was unbeaten in her show career and sold at 20 months old for €10,400.

In 1996, I went on a trip to Limoges in France with a group of Limousin breeders. Throughout the trip, we visited a number of herds and saw a lot of progeny of a bull called Gamin (GIA). With a lot of advice from our expert group, I decided to purchase Gamin and the rest is history. Gamin left an enduring legacy on the herd. He was also used in AI to the huge benefit of fellow breeders.

My land is very fragmented, so I always like to keep a good stock bull. I use 80% AI on my animals which I inseminate myself. In the past I used French sires: Dauphin; Villy and Highlander; Espoir; Ideal 23; Ronick Hawk and Samy; Wilodge Cerberus; Ampertaine Foreman; Ampertaine Commander and Wilodge Tonka. Milk and docility and ease of calving are my priorities.

My herd is 35 years T.B. and brucellosis free and all my animals are export tested. Today is a great opportunity to acquire genuine stock that have no faults. All females have been expertly scanned by Dr. Dan Ryan and come with certificates. All bulls are fertility tested with certificates. For buyers who need transport recommendations — I can assist with this.

And last but not least, I’d like to thank all of those who have being at my side over the years; my wife Phil and my family for all their work throughout the years; and my brother Johnny who helped in the farm. I’d also like to pay a special tribute to Robert Watchorn who worked part time with me for many years but sadly passed away six years ago. Special thanks to Andrew McCarthy who travelled the length and breadth of the country with me to shows and sales.

I’d also like to mention my fellow breeders in the Clare Club which I was a founding member of and the current secretary; as well as the Irish Limousin Society for the work they have done throughout the years; and the current council members who have a very challenging job. The society are very lucky to have a secretary in the calibre of Paul Sykes who did everything possible in advising me on this sale helped by office staff Marie, Collette, Kathryn and Ann. I’d also like to give a special mention to Auctioneer George Chandler whom I had the banter with many a day.

Thank you to Michael Harty, Mart Manager and all his team for managing today’s sale. Lastly, I’d like to give a special thank you to my neighbours and fellow breeders for all their help in preparing for this sale. There are a lot of other people who I would love to thank, but there are too many to mention.

Thanks to the purchasers and best of luck with your new animals.

The Irish Limousin Cattle Society would like to wish Michael, Phil and the Sexton family all the very best of health and happiness with their future endeavours.

The sale met with an excellent clearance. Top price at the sale was €8,000, this was reached by four lots. First at this price was Mount Scott Gabrielle, a Mount Scott Dessie ET (Mas Du Clo X Aran) daughter. Gabrielle sold with her August 2017 born Ampertaine Foreman daughter – Mount Scott Melanie at foot. Gabrielle was scanned back in-calf to Ampertaine Foreman. She was purchased by Aidan Keenan, Mullingar, Co. Westmeath.

On the same money, was the cow and calf combination Mount Scott Gouldy and Mount Scott Miriam 2 (a Wilodge Cerberus) daughter. Gouldy has Sympa, Gamin and Ideal 23 in her sire stack. She is back in-calf to Wilodge Cerberus. Gouldy returns to county Clare to Seamus Moroney, Kilmore.

The Tawnagh herd of Jerry Huban, Kinvara, Co. Galway acquired the outstanding show cow Mount Scott Eileen and her Bavardage daughter Mount Scott Martha 3 for €8,000. Eileen is a daughter of Milou-Mn and Mount Scott Arlene, herself a prize winning Cloughhead Lord daughter. Eileen had five embryo calves which were also sold today. This much-admired cow is also back in-calf.

Eileen’s maternal sister Mount Scott Lotto, a 16-month-old heifer also realised €8,000. Lotto is a daughter of Ampertaine Gigolo. She was acquired by a Galway pedigree herd.

Mount Scott Ita 2 and her Lodge Hamlet daughter – Mount Scott Mercy sold for €7,200. Ita 2 is a daughter of Eileen and Ballyfin Empire ET, she was served to Wilodge Cerberus at the end of October. Adrian Buckley, Drimoleague, Co. Cork acquired Ita and Mercy.

Mount Scott Mia Et – another daughter of Eileen (sired by Sympa) sold for €6,500 to the Newtown herd of Stanley Richardson, Newtowngore, Co. Leitrim. Mia was born in October 2017 and sold with her surrogate dam.

In-calf Mount Scott Iona sold for €5,600  to a county Tyrone based purchaser. Iona has Wilodge Cerberus, Ronick Hawk and Gamin in her sire stack.

Mother and son duo – Mount Scott Guna and Morris sold for €5,500 to Patrick Brennan, Ballylinnan, Co. Laois. Guna is a daughter of Procters Cavalier, she is back in-calf to Ampertaine Foreman. Morris is a five-month-old son of Fieldson Alfy.

Mount Scott Major Et an embryo son of Eileen and Ampertaine Foreman sold for €5,300 with his surrogate dam. Much admired Major was born in October 2017 he was purchased by Stanley Richardson’s Newtown herd.

In-calf Elite Forever Brill Et daughter Mohan Janet sold for €5,200 with her Castleview Gazelle son Manor at foot. Janet is back in-calf since January. She was purchased by Sean Moriarty, Lissycasey, Co. Clare.

The Gartinardress herd of Austin Armstrong purchased the Aloor Felix daughter Isabelle and her Ampertaine Foreman calf Miranda for €5,000.

November 2016 born Lolo sold for €4,800 to Joseph Fitzpatrick, Templemore, Co. Tipperary. Lolo is a daughter of Aloor Felix and a grand-daughter of Ballyfin Empire Et and Eileen.

Sean Moroney of the Ballykinncurra herd based in Corofin, Co. Clare acquired 10-month-old Molly for €4,600. Molly has Bavardage, Castleview Darren, Sympa and Mas Du Clo in her lineage.

Selling for €4,000 was Katie, an Ampertaine Foreman daughter and her November born son Mel. Katie is back in-calf to Lodge Hamlet. She was acquired by Bill Duff for his herd in Nenagh, Co. Tipperary.

Gerard Savage purchased Mount Scott Josie and her Fieldson Alfy daughter Miami for his Ardborra herd based in Drumraney, Co. Westmeath. Josie has Wilodge Cerberus, Ronick Hawk and Gamin in her sire stack.

Arlene, the in-calf dam of Eileen sold to the Ballyrickard herd of Ian Davidson, Larne, Co. Antrim for €3,800. 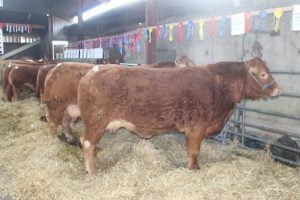 Jenna, a Wilodge Cerberus cow and Martha 2, her Lowerffrydd Empire calf sold for €3,500 to the Moohane herd of John Meehan, Newmarket-on-Fergus, Co. Clare.

Joanne, an in-calf daughter of Aloor Felix, with Nino and Hortensia in her back pedigree sold for €3,400 to John Shannon, Corofin, Co. Clare.

Manweel Et, an embryo son of Eileen and Ampertaine Foreman sold for €3,400 to Stephen O’Grady, Mullagh, Co. Clare for his Doonogan herd. Manweel was born in October 2017.

Helena 2, a Sympa cow sold for €3,100 to John Shannon, Corofin, Co. Clare. Helena 2 is due to calve shortly to Kilskeagh Jisop.

Edwina, a Ronick Hawk daughter sold for €3,100 to Tom Feehan for his Cross Pedigree herd based in Westport, Co. Mayo.

Mario Et, an embryo son of Ampertaine Foreman and Eileen sold for €3,000. Mario is six months old, he sold with his surrogate dam.

Imelda, an in-calf daughter of Aloor Felix sold to the Caherhurley herd of Ciaran Walsh, Bodyke, Co. Clare for €2,000. 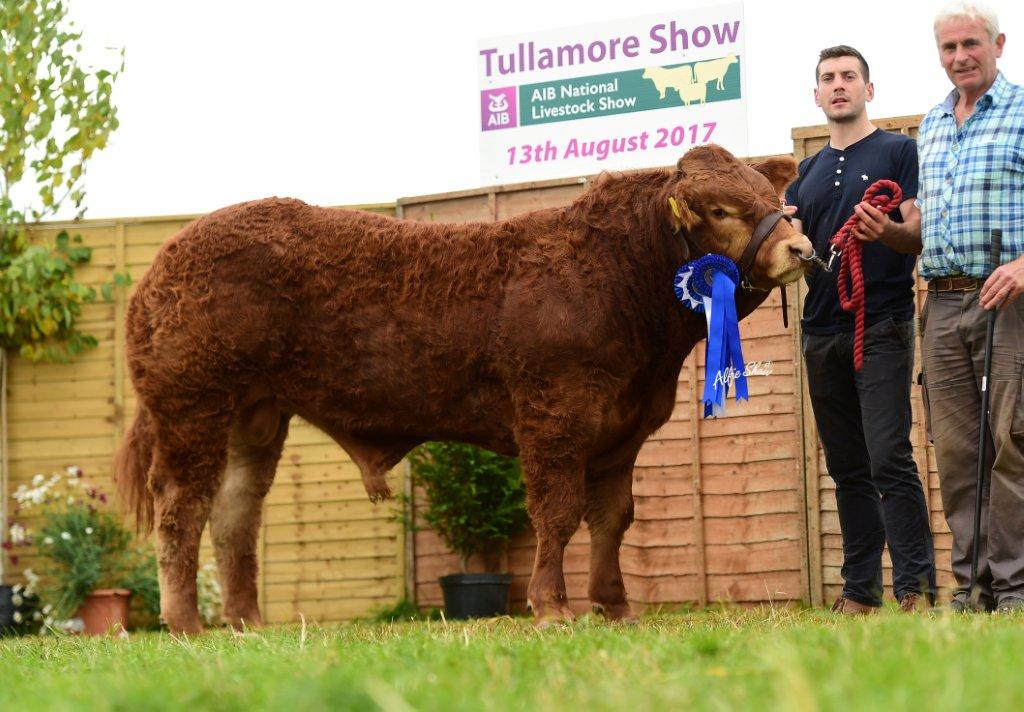 The Reserve Junior Male Champion at the National Show in 2017 Mount Scott Lifeboy sold for €5,400. Lifeboy has Ampertaine Gigolo, Elite Forever Brill Et and Rocky in his sire stack. His dam Moohane Janet sold earlier in the sale for €5,200. Lifeboy returns to Mullagh, Co. Clare to the farm of Martin Sexton.

The Castlewaller herd of Dennis Corrigan, Newport, Co. Tipperary acquired Michael’s stock bull Kilskeagh Jisop for €5,000. Jisop has Bavardage, Castleview Darren and Tistou in his lineage. Many of Jisop’s offspring were on offer and commanded very good prices.

Lottery, a son of Gamin (ZGM) sold for €3,500 to Austin Armstrong of the Gartinardress herd based in county Cavan. Born in November 2016, Lottery also has Wilodge Cerberus and Ronick Hawk in his pedigree.

Lucas, a son of Wilodge Tonka and Gabrielle (sold in this sale for €8,000) was purchased by Joe Keane, Kilrush, Co. Clare. Eighteen-month-old Lucas sold for €3,200.

The Enniscorthy, Co. Wexford based Farmleigh herd of David and Joe Swaine acquired Mount Scott London for €3,200. London is a son of Elderberry Galahad and the Aloor Felix daughter Mount Scott Iva.

The youngest bull on offer, 13-month-old Max sold for €3,200. Max has Kilskeagh Jisop, Samy and Gamin in his lineage. Max was purchased by Tom Greene, Roscrea, Co. Tipperary.

Leo 2, a son of Aloor Felix with Ampertaine Abracadabra and Cloughhead Lord in his back pedigree sold for €2,900 to Michael Twomey, Miltown Malbay, Co. Clare.

The next Limousin Sale will be held in Athenry Mart on Thursday the 12th April at 1pm. A total of 91 bulls and 2 heifers are on offer. ⇒Catalogue is available by clicking here⇐