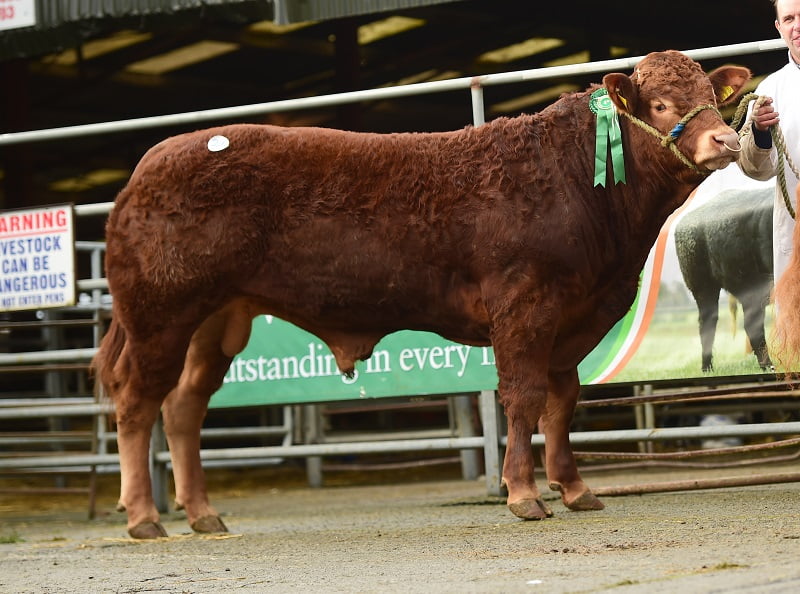 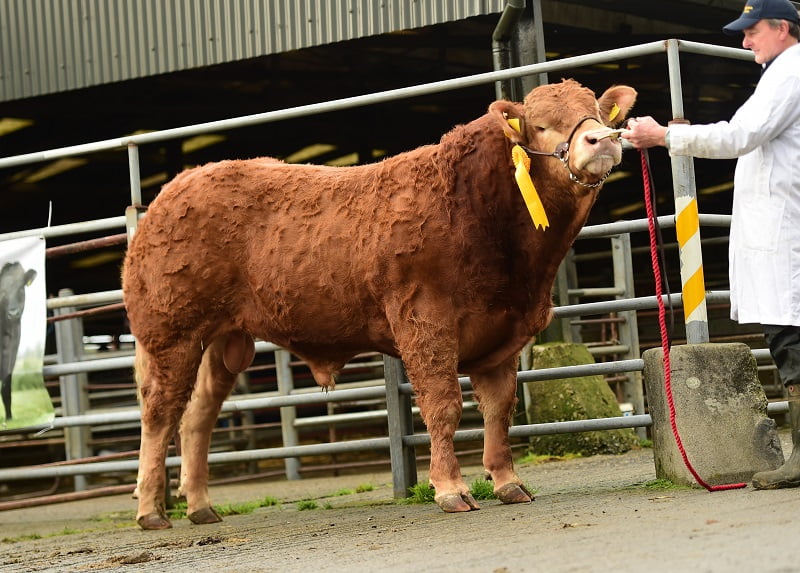 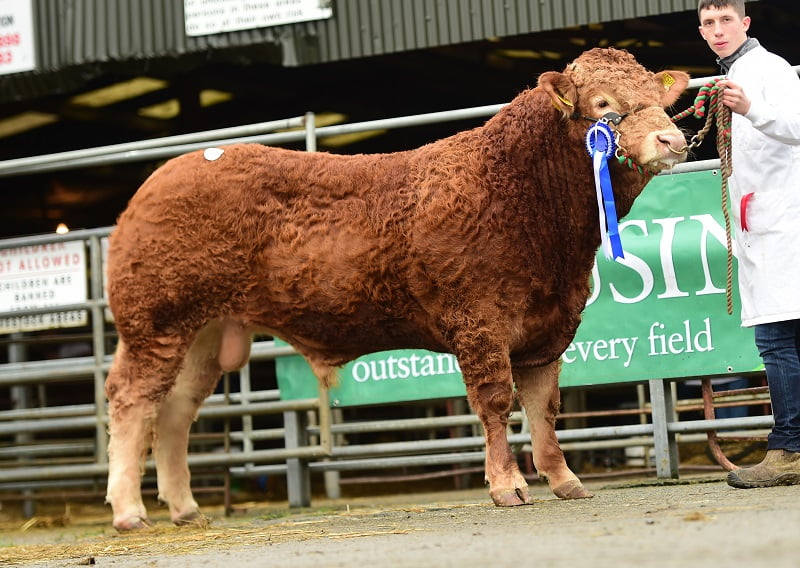 Also at €3,000 was the Reserve Champion Parkhill Legacy. Born in July 2016, Legacy was bred by Joe Maher, Ballyfoyle, Co. Kilkenny. With five star ratings in almost all traits, Legacy has a muscle score of 137 and a skeletal score of 119. Legacy was acquired by Noel Joyce from Borris. 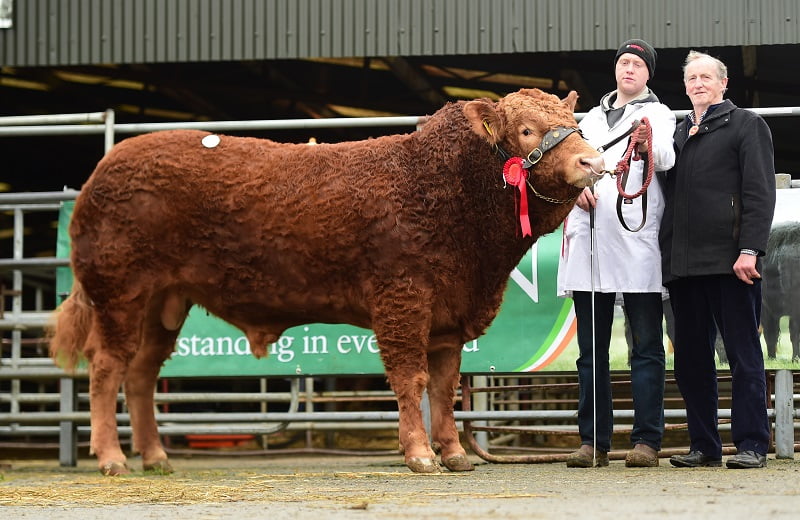 James Stanley, Gorey, Co. Wexford purchased Galbally Lane 1171 from his fellow county man Trevor Masterson for €2,500. Lane is steeped in Galbally genetic’s, he is a son of Galbally Danastic (F163) and Galbally Happy. Lane was placed third in his class in the pre-sale show. He has five star ratings in many traits. 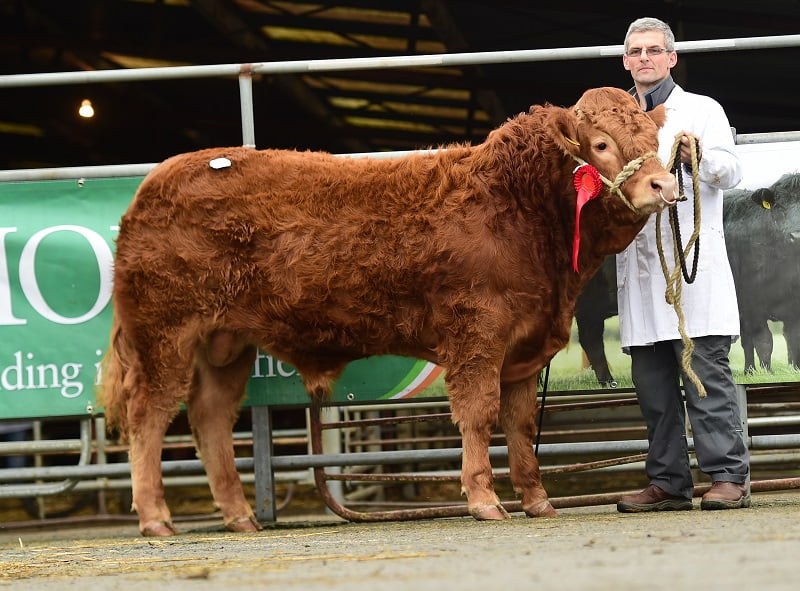 The second youngest bull to sell at this sale was 12 month old Brooklands Lewis from Clive Jennings, Enniskeane, Co. Cork. Lewis is a first prize winning son of Roundhill Saturn (RHN) and Brooklands G 0987. He has a five star Terminal Index of €134 and five star Replacement index of €105. He was purchased by William Burke, Killeshin, Co. Carlow for €2,500.

Coolrain Liam from Gearoid and Padraic Kennedy, Portlaoise, sold for €2,300. Liam is a son of the Coolrain herd sire Newtown Hardman. He was purchased by Dan Courtney, Celbridge, Co. Kildare.

Multi-starred Bremore Lumberjack sold for €2,200. Lumberjack was bred in Skerries, Co. Dublin by Bobby Jones. He has On-Dit (ONI), Vivaldi and Justicier in his sire stack. Lumberjack was acquired by local farmer Frank Bailey.

At the same selling price was Coolrain Louis Dgtastic from the Kennedy brothers. Louis is a son of Drummin Goliath and Coolrain Fia Mchawk. With five star ratings in almost all traits, Louis has a muscle score of 124 and a skeletal score of 122. 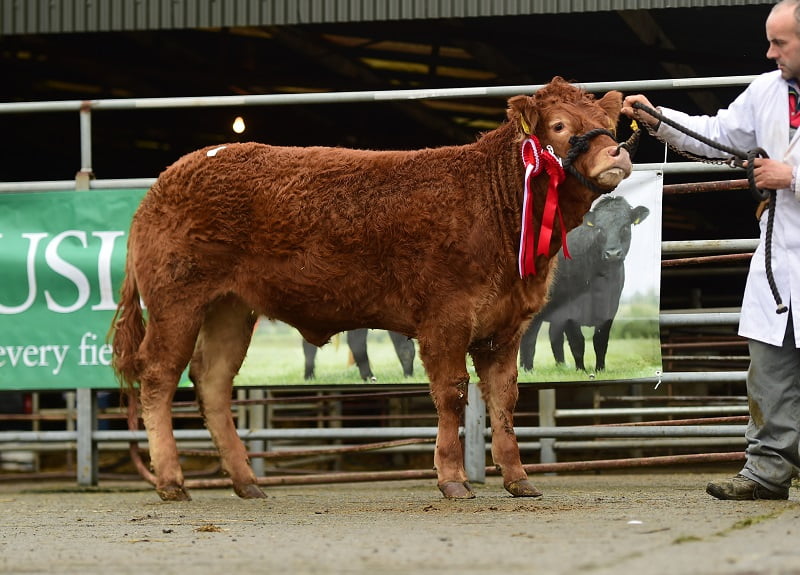 Only one heifer was on offer here in Tullow – Barryroe Lislee from James Wycherley, Carrignavar, Co. Cork. Lislee is a daughter of Ampertaine Commander and Barryroe Fionnula. She left the ring unsold.