The entire Eyrecourt pedigree Limousin herd of John Murphy, Ballinasloe, Co. Galway came to auction on Saturday 30th September 2017 in Roscrea mart. John has changed his farming system. A lively trade met with a price range of €7,600 to €1,300. The buyers consisted of established breeders along with many first time pedigree Limousin purchasers.

Lot 60. Eyrecourt Flower, a seven year old Sympa daughter was the topped priced animal at the sale, she sold for €7,600. Flower sold in calf to to Queenshead Altea. She was acquired by Galway based breeder Patrick Gill for his Kilskeagh pedigree Limousin herd.

Lot 19. €7,000 was top call for the two year old in-calf heifer Eyrecourt Kloe. This heifer is due to calf in December to Queenshead Altea. Kloe is a daughter of the aforementioned Flower. She now joins the Cappaduff herd of Joe Moran, Claremorris, Co. Mayo.

Lot 42. Three lots fetched €3,500. First at this price was Eyrecourt Judo, a Malibu daughter. Judo sold to John McInerney of the Drummin herd based in Newmarket-On-Fergus, Co. Clare. She came to the ring with her May 2017 born Queensheads Altea son – Eyrecourt Morgan at foot. Judo is scanned in-calf, to calve in April 2018 to Ewindenvale Ivor.

Lot 69. Eyrecourt Laurance, an On-dit son, also realised €3,500. Laurance has Mas Du Clo and Rosscahill Uri in his back pedigree.

Lot 34 Eyrecourt Golden by Rocky, sold with her heifer calf at foot Eyrecourt Mella by Ampertaine Foreman. Golden is due to calf in April to Elderberry Galahad. She sold for €3,400 to the Meenross herd of James O’Grady.

Eyrecourt Mella – daughter of Eyrecourt Golden and Ampertaine Foreman – sold with her dam for €3,400 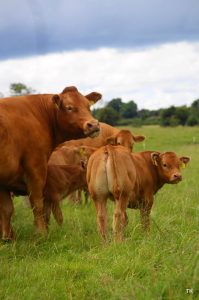 Lot 49. Eyrecourt Iona by Mas Du Clo sold with her bull calf at foot and back in-calf for €3,200. Iona is due to calf down in mid March to Ampertaine Foreman.

Lot 3.The Highlander daughter, Eyrecourt Glory sold for €3,100. Glory came to the ring with her bull calf at foot, she is due to calve down again in May to On-Dit.

Lot 13. Eyrecourt Gina by Omer-Mn sold for €3,100. Gina is due to calve in March to Queenshead Altea. She sold with her bull calf.

Lot 33. A Highlander daughter Eyrecourt Heat Wave also sold for €2,800. Heat Wave is in-calf to Wilodge Cerberus and is due to calve in November.

Lot 58. The Sympa daughter Eyrecourt Field sold with her heifer calf for €2,800. Field is back in calf to Wilodge Cerberus. She is due to calf in late April.

Lot 66. The On-Dit son Eyrecourt Laron commanded a price of €2,800. Laron is a 14-month old with back pedigree to Malibu and Sympa. 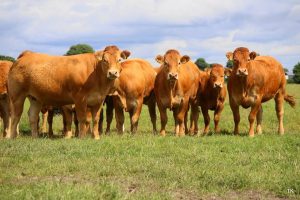 Some other prices on the day included: